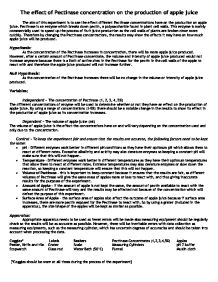 The effect of Pectinase Concentraton on the production of apple juice

However, there will be inevitable errors with data collection as measuring equipments, such as the measuring cylinder, which has uncertain degrees of accuracies and should be taken into account when processing the data. Goggles* Labels Beakers Pectinase Concentrates (1,2,3,4,5%) Apples Peeler, Knife and tile Grater Scale Measuring Cylinders pH 7 buffer Stopwatch Glass rod Water Bath (50�C) Funnel Muslin cloth [*Goggles should be worn at all times during the process of the experiment] Method: 1. Gather apparatus and label the beakers with the different Pectinase concentrations 2. Peel the apple and grate 50g into each beaker. (remove excess apple juice that is produced) 3. Measure 20ml of pH 7 buffer and 30ml of concentration 4. Pour liquids into appropriate beaker and start timing. Stir for 30seconds with glass rod 5. Place the beaker in the water bath for 10 minutes 6. Filter the juice from each beaker into measuring cylinders with funnel and Muslin cloth. Then remove Muslin cloth and funnel with the apple pulp after 2 minutes. Record amount of Apple Juice produced in table as seen in fig. 1. 7. Repeat 3-6 with different concentrations Concentration of Pectinase (%) Volume of Apple Juice (ml) [� 0.1 ml] Average Volume of Apple Juice (ml) Trial 1 Trial 2 Trial 3 1 49 50 48 49 2 51 51 50 50.6 3 55 52 51 52.6 4 57 56 42 51.6 5 60 50 54 54 Fig 1. ...read more.

This may be because there were many other factors that were unavoidable such as human errors, time constraints and insufficient skills in measuring as well as the degree of accuracy of the equipment. Conclusion Overall, the experiment was quite successful as only one anomaly was found in trial 3 which caused the results to be inaccurate. The causes of it was understood and could be avoided next time if it were to be repeated and enabled a improvement and proved as a positive effect. The anomaly did not have a great impact on the results as well because the overall trend of the graph did support the hypothesis and if the anomaly did not occur it could have been quite accurate. To improve on this experiment however, some of the errors mentioned should be avoided so that the results would be even more accurate. Some errors are also more easily avoided than others and therefore more manageable but other errors such as time constraints would require more preparation and human errors would be more difficult to control so these errors may be exempted. Another improvement can be to increase the range of concentrations used so that the accuracy of the hypothesis can be further dis/proven. One last additional suggestion can be to record the rate of reaction as well which means the amount of apple produced can be taken out to measure in time intervals and would give a greater variety of results to analyze. Tisha Yap 6C2 ?? ?? ?? ?? ...read more.

**
The practical procedure and data collection in this investigation are good. The graph produced shows positive correlation to support the hypothesis and with an increased range of concentrations may have fully supported the hypothesis if a plateau were seen on the graph at a certain concentration.
However the scientific theory was, at times, used sparingly and incorrectly as I have explained in the comments. Remember within prose 'pectinase' does not need to be capitalised.