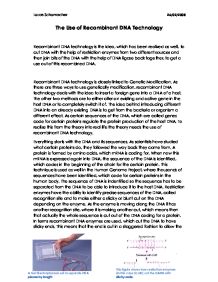 The Use of Recombinant DNA Technology

The Use of Recombinant DNA Technology Recombinant DNA technology is the idea, which has been realized as well, to cut DNA with the help of restriction enzymes from two different sources and then join bits of the DNA with the help of DNA ligase back together, to get a use out of this recombined DNA. Recombinant DNA technology is closely linked to Genetic Modification. As there are three ways to use genetically modification, recombinant DNA technology deals with the idea to insert a foreign gene into a DNA of a host. The other two methods are to either alter an existing and active gene in the host DNA or to completely switch it of. The idea behind introducing different DNA into an already existing DNA is to get from the bacteria or organism a different effect. As certain sequences of the DNA, which are called genes code for certain proteins regulate the protein production of the host DNA. To realize this from the theory into real life the theory needs the use of recombinant DNA technology. Everything starts with the DNA and its sequences. As scientists have studied what certain proteins do, they followed the way back they came from. A protein is formed by amino acids, which mRNA is coding for. ...read more.

As now a plasmid is taken and is cut with the same restriction enzyme then the DNA sequence is going to have the same sticky ends. To be able to recognize later on the plasmid, which has been prepared the plasmid carriers two genes inside itself. These genes inside the plasmid make the bacteria resistant against the antibiotics ampicillin and tetracycline. A recognition sequence lies within the tetracycline gene, where the restriction enzyme made a cut. The cut plasmid and sequence of DNA are put together. Naturally the complementary sticky ends (as mentioned before same restriction enzyme) are attracted to each other and then bonded by adding the enzyme DNA ligase. The recombinant plasmid is introduced into bacterial cells, by just adding the DNA to the bacterial, which picks it up through the terms of transformation. From this point on cloning of the ``new�� plasmid starts as the bacteria is reproducing. To actually now be able to recognize the recombinant plasmid in the bacteria from the other bacteria, because not all of the bacteria picked the plasmid up a copy is taken from the bacteria cultures. The original culture is now tested on tetracycline. As mentioned above the tetracycline resistant gene has been taken apart by restriction enzyme at our new plasmid, because a recognition side lied within it. ...read more.

into the zeprafish genome. The protein is a natural produced green bioluminescence from a jellyfish. The fish is as well able to fertilize. At first the experiment was for developing a fish detecting pollution, but already in 2003 the trademarked protected fish called ``GloFish�� went on the Taiwan market for $18.60 each. In December 2003 the fish was allowed to be sold in the US as well, as the firm of GloFish made various experiments and there was and is apparently no danger from a fish, which contains recombinant DNA (statement of the Glofish firm). Until now the fish is not allowed in Europe, because it is containing recombinant DNA or it is genetically modified. Overall Recombinant DNA Technology is a great way to discover a lot of things, because there is just so much to actually experiment with. My opinion is that the development of this technology should not stop. Scientist should be allowed to research for things that could be beneficial to the human kind, but everything has to be controlled and serious. No messing around with genes, like I think the GloFish is. Sources http://learn.genetics.utah.edu/units/basics/print-and-go/gel_electro.cfm http://academic.brooklyn.cuny.edu/biology/bio4fv/page/genetic-engin/restriction%20enzyme.html http://www.urdugame.com/the-glofish/ "Troubled waters: fluorescent fish spark GM row" by A. Gumbel, May 4th, The Independent, London, England ``Biology for the IB DIPLOMA�� Chris Clegg 2007, fist published in 2007 by Hodder Murray ``Senior Biology 1�� 2008 Student Workbook, Richard Allan 2007, published by BIOZONE International Ltd Word count: 1407 ?? ?? ?? ?? Lucas Schumacher 26/02/2008 ...read more.