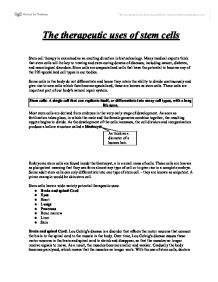 The therapeutic uses of stem cells Stem cell therapy is examined as an exciting direction in biotechnology. Many medical experts think that stem cells will be key to treating and even curing dozens of diseases, including cancer, diabetes, and neurological disorders. Stem cells are unspecialized cells that have the potential to become any of the 220 specialized cell types in our bodies. Some cells in the body do not differentiate and hence they retain the ability to divide continuously and give rise to new cells which then become specialized, these are known as stem cells. These cells are important part of our body's natural repair system. Most stem cells are derived from embryos in the very early stage of development. As soon as fertilization takes place, in which the male and the female gametes combine together, the resulting zygote begins to divide. ...read more.

As a result, the muscles become smaller and weaker. Gradually the body becomes paralyzed, which means that the muscles no longer work. With the use of stem cells, doctors will be able to replace damaged motor neurons. Eyes: Muscular degeneration is the main cause of blindness in adults of all ages. In a fit eye, the lens and the cornea focus light onto the retina. The light is converted in to electrical signals with the help or rods and cons and are sent to the brain via optic nerves. Part of the eye called macula is a spot near the center of the retina that contains a lot of cones cells which is highly responsible for the central vision. Normally, the choroid removes the waste away from the cells and provide them with nutrients. When this does not happen the retinal cells are destroyed causing blindness. ...read more.

In order to prevent the immune system from rejecting a new pancreatic cells, the patient must take immune-suppressant drugs. Throughout years, stem cell research has grown as well as increasing the controversy with it. The debates surrounding stem cell research primarily are driven by methods concerning embryonic stem cell research. It was only in 1998 that researchers from the University of Wisconsin-Madison extracted the first human embryonic stem cells that were able to be kept alive in the laboratory. The main critique of this research is that it required the destruction of a human blastocyst. That is, a fertilized egg was not given the chance to develop into a fully-developed human. The stem cell debate has risen to the highest level of courts in several countries. Production of embryonic stem cell lines is illegal in Austria, Denmark, France, Germany, and Ireland, but permitted in Finland, Greece, the Netherlands, Sweden, and the UK. ...read more.