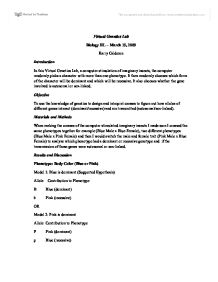 Virtual Genetics Lab Biology HL - March 15, 2009 Karry Calderon Introduction In this Virtual Genetics Lab, a computer stimulation of imaginary insects, the computer randomly picks a character with more than one phenotype. It then randomly chooses which form of the character will be dominant and which will be recessive. It also chooses whether the gene involved is autosomal or sex-linked. Objective To use the knowledge of genetics to design and interpret crosses to figure out how alleles of different genes interact (dominant/recessive) and are transmitted (autosomal/sex-linked). Materials and Methods When making the crosses of the computer stimulated imaginary insects I made sure I crossed the same phenotypes together for example (Blue Male x Blue Female), two different phenotypes (Blue Male x Pink Female) and then I would switch the male and female trait (Pink Male x Blue Female) to analyze which phenotype had a dominant or recessive genotype and if the transmission of these genes were autosomal or sex-linked. Results and Discussion Phenotype: Body Color (Blue or Pink) Model 1: Blue is dominant (Supported Hypothesis) Allele Contribution to Phenotype B Blue (dominant) b Pink (recessive) OR Model 2: Pink is dominant Allele Contribution to Phenotype P Pink (dominant) p Blue (recessive) In both Models the trait is autosomal, no data was observed that proved otherwise. List of Crosses for Body Color Phenotype Cage 1: 9 Blue Males; 7 Blue Females; 13 Pink Males; 9 Pink Females. ...read more.

Parents: Short Male (3) x Short Female (9) gave offspring: Cage 10: 17 Short Males; 18 Short Females. Using the data provided Model 2 proves inconsistent with the data because if the long phenotype were in fact recessive than when a long male is crossed with a long female all the offspring must be long. Parents: Long Male (1) x Long Female (1) gave offspring: Cage 3: 8 Short Males; 9 Long Males; 8 Long Females. In Cage 3 the offspring of a long male and long female are both short and long therefore long must be dominant. Since the trait is sex-linked and the males were the only short ones, the female (parent) must be heterozygous where only the males are capable of being short since they only inherit one X chromosome from the mother. Model 1 holds true where: Allele Contribution to Phenotype XL Long (dominant) Xl Short (recessive) If this were so, then the parents of Cage 7, Short Male and Long Female, The Short Male would be XlY and the Long Female would be XLXL. Short Male (XlY) x Long Female (XLXL) All the Offspring would be Long where the Males should be XLY - Long and the females should be XLXl - Long. All offspring in the observed data were long thus this is consistent with the data. ...read more.

and are transmitted (autosomal/sex-linked). The Virtual Genetics Lab is a computer stimulation of genetics of imaginary insects. The computer randomly picks a character with more than one phenotype. It then randomly chooses which form of the character will be dominant and which will be recessive and whether the gene involved is autosomal or sex-linked. As in a real genetics lab, the insects are kept in cages; Cage 1 contains the Field population, individuals collected in the wild. One can select any two insects (male and female) and cross them; the computer automatically puts their offspring in a new cage. Evaluation When the crosses were made one must recognize how to analyze if a trait is dominant or recessive, for instance if a red male was crossed with a green female and all the offspring were red, the conclusion would be that red must be dominant and green must be recessive because (RR x rr = Rr), therefore both parents were homozygous but one had the dominant and the other had the recessive trait thus all the offspring were heterozygous and red. This experiment consisted of several models but it was very simple to determine whether they were consistent or not by using punnett squares. This lab does not have a margin of error because one must create models to interpret the crosses and using punnett squares and the knowledge of genetics, if a model was not consistent there was always an alternative model which would be consistent. ...read more.