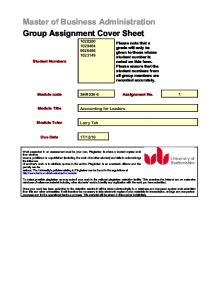 Master of Business Administration Group Assignment Cover Sheet Student Numbers 1028200 1029464 0926486 1023149 Please note that a grade will only be given to those whose student number is noted on this form. Please ensure that the student numbers from all group members are recorded accurately. Module code SHR036-6 Assignment No. 1 Module Title Accounting for Leaders Module Tutor Larry Teh Due Date 17/12/10 Work presented in an assessment must be your own. Plagiarism is where a student copies work from another source, published or unpublished (including the work of another student) and fails to acknowledge the influence of another's work or to attribute quotes to the author. Plagiarism is an academic offence and the penalty can be serious. The University's policies relating to Plagiarism can be found in the regulations at http://www.beds.ac.uk/aboutus/qa/documents To detect possible plagiarism we may submit your work to the national plagiarism detection facility. This searches the Internet and an extensive database of reference material including other students' work to identify any duplication with the work you have submitted. Once your work has been submitted to the detection service it will be stored electronically in a database and compared against work submitted from this and other universities. It will therefore be necessary to take electronic copies of your materials for transmission, storage and comparison purposes and for the operational back-up process. This material will be stored in this manner indefinitely. Executive Summary 4 Introduction 5 Section 1 - About BP plc 6 - 12 1.1 Company overview 6 1.2 History 7 - 8 1.3 Key company information 9 1.4 Locations 9 1.5 Key executives 10 1.6 Key products and services 10 1.7 BP plc brands 11 1.8 Share ownership statistics 2005 - 2009 11 1.9 Safety - Workforce facilities over the past 10 years 11 1.10 BP's oil production and total replacement cost profit before interest and tax (RCPBIT) ...read more.

2005 - 2009 5.2 Profitability Revenue As with most of the financial ratios total revenue of companies in the oil and gas sector are heavily weighted by the underlying commodity price. BP has had lower revenue than Exxon and Shell, over the five years covered by this report. This gap has closed significantly in 2009. Total revenue USD$ millions 5.2 Profitability Net and operating profit margin All the companies' operating and net profit margins fell over the time period, associated with the economic downturn. BP have managed to improve their profit margin in the year 2009, leaving BP with a better net profit margin than any of its main competitors. Net profit margin % 5.2 Profitability Net and operating profit margin Operating profit margin % 5.3 Liquidity BP's current and quick ratios have been below the industry average, and its main competitors. Data from 2009 show that BP's current ratio has converged with its competitors. The difference between these two ratios reflects the critical nature of oil reserves to all these companies. Current ratio 5.3 Liquidity Quick ratio 5.4 Efficiency Total and fixed net asset turnover With principle assets of gas and oil fields, these ratios are dominated by commodity prices. From 2005 - 2008 BP's asset ratios were worse than its competitors, but its ratios came into line in 2009. Total asset turnover Fixed net asset turnover 5.4 Efficiency Working capital turnover BP between 2005 and 2008 went from having the worst working capital turnover against Shell and Exxon to having the best. In 2009 the performance dropped significantly leaving it marginally higher than the industry average. 5.4 Efficiency Operating cycle Over the five year period BP improved its operating cycle relative to Shell, but still trailed behind Exxon. 5.5 Investment Price to earnings ratio It is generally regarded that a lower price to earnings ratio indicates better value for money for an investor. ...read more.

Fossil fuels Oil, natural gas and coal. These non-renewable sources of energy are normally produced by mining or drilling. Global economic crisis Also known as The Financial Crisis, and The Credit Crunch. The recession started in the USA in 2007, and spread to almost all developed economies. 2007 - 2010. Housing bubble Housing pricing within the USA were artificially high due to many people buying houses with mortgages that the owner could not afford to repay. This lead to increased house prices until the burst of the bubble in 2007, when many banks realised they could not identify good debts from bad or "toxic assets". This triggered the global economic downturn of 2007 - 2010. Hydrocarbons The chemical term for natural gas and oil. OPEC Organization of the Petroleum Exporting Countries. Composed of twelve oil producing countries from the Middle East, Africa and South America. It is a cartel, and has a large impact on global oil prices by controlling oil production by its members, which produce 42% of the world's crude oil. BP, Shell and Exxon Mobil are not member of OPEC. OPEC controls the oil production within twelve countries. OPEC's goal is to keep the price per barrel of oil at around $70 per barrel. OPEC meets and determines the oil demand forecast, causing the price of oil to fluctuate wildly. Peak oil This is a theoretical point in time when global production of oil is highest. After this point production will decline. The timing of peak oil is debated. Royal Dutch Shell plc A major global oil and natural gas producer, distributer and retailer, commonly known simply as Shell. Upstream The grass roots of the oil business, upstream refer to the exploration and production of oil and gas. Many analysts look at upstream expenditures from previous quarters to estimate future industry trends. For example, a decline in upstream expenditures usually trickles down to other areas such as transportation and marketing. ?? ?? ?? ?? 42 Accounting for leaders - Assignment 1 - December 2010 ...read more.