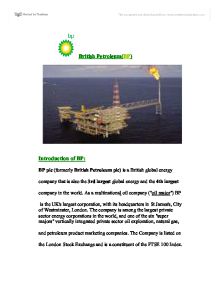 British Petroleum(BP) Introduction of BP: BP plc (formerly British Petroleum plc) is a British global energy company that is also the 3rd largest global energy and the 4th largest company in the world. As a multinational oil company ("oil major") BP is the UK's largest corporation, with its headquarters in St James's, City of Westminster, London. The company is among the largest private sector energy corporations in the world, and one of the six "super majors" vertically integrated private sector oil exploration, natural gas, and petroleum product marketing companies. The Company is listed on the London Stock Exchange and is a constituent of the FTSE 100 Index. This company operates in six continents like North America, South America, Australia, Asia and Europe. but they are selling serving and sells their products in different countries of the world and they are having more than 13million consumers. --> Our main products All over the world highest number of natural gas and oil produced by BP and it is the biggest investor in energy development BP is the leading producer of oil and natural gas in the United States and the largest investor in U.S. energy development. BP's key products are crude oil and petroleum and it refine, sell, transport in different countries. On the trading side BP is having good customer network and in North America BP stands with second largest refiner and second largest fuels marketers. ...read more.

The key players in this industry are powerful on their own and who are able to influence this oligopolistic market by their supplies. The main competitive force for BP is the challenge ahead with climate change and restrictions by policy makers. Climate change in the reason years have featured on Washington agendas, and despite having political differences countries like China, India and America who are the main countries which account for the worlds carbon emissions have come together in working towards a timetable to address climate change issues and to align there economies by giving priorities to this issues. BP's Approach to a Lower-Carbon Future. The British Petroleum Company ( BP) is very serevious and taking great action to find out the way of low carbon energy. BP has decreased their own participation in carbon energy. The following chart give us a better idea and figures about BP's network for carbon energy matter. Figure 1. Progress of lower- Carbon. (Taken from www.altenergystocks.com ) BP has set carbon emissions as the high priority when choosing new future investments and engineering future projects in both fossil and renewable energy . to overcome it believes in energy security which means by diversifying as the statement by Churchill which stated " safety and uncertainty of oil lie in variety and variety alone "which clearly gives important to different sources of energy . ...read more.

5.Chevron and Shell are the main competitors. 6.In the next few months will be hitting more than 5.000 shortage. Market access product characteristics and reality of operation. TNK-BP LTD. TNK-BP (Tymen oil Co.) was a merger in August 2003 in the British Virgin Island as a (TNBP). It was a major vertically integrated Russian and Ukraine oil and gas with assets of Alfa group and Access Renova group, a stakeholder called AAR. TNK-BP after the merger it became the world largest oil company. Because of the BP's majority assets in Russia the company owned 50% and the other 50% was owned by the group of prominent Russian investors the AAR, (Access industries and Renova). TNK-BP combines the best Russian and international skills and experiences, it is managed by a multinational management team, which consists of Russian and international executives who have working in more than 50 countries worldwide. The company has 70,000 people and operations in Russia. Since the foundation of TNK-BP in 2003 it has become an outstanding success in terms of growth. TNK-BP announced a net income of $1.7 billion in the third quarter of 2009, up 34% of the previous quarter; it has recorded the industry-leading 130% reserves replacement ratio over the past three years. Conclusion: Finally we can say that BP is a most valuable multinationl oil company in the world. It is the brand having sustaniblity,strong infrastructure,and management power.Apart from some environmental issues , company has enormous amount of strategic capabilities and advantages over its rival companies. ...read more.