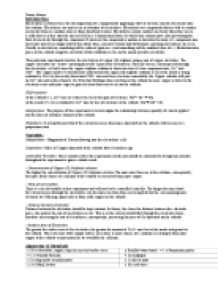 ï»¿Danny Aburas Introduction Electrolysis is referred to as the decomposition of a compound by applying a flow of electron current (electricity) into the solution. Electrolysis can only occur in solutions of electrolytes. Electrolytes are compounds that are able to conduct electricity when in a molten state or when dissolved in water. Electrolytes cannot conduct electricity when they are in a solid state as in this state the ions are held in a 3 dimensional lattice in which they cannot move, thus preventing the flow of electricity through the compound. If, however the compound is molten or dissolved in water, it’s component ions dissociate and are no longer held by this lattice thus, can move around and furthermore, meaning electrolysis can occur. Usually in electrolysis, something will be reduced (gain in e-) and something will be oxidized (loss of e-). Reduction takes place on the cathode (negative electrode) while oxidation occurs on the anode (positive electrode). This particular experiment involves the electrolysis of copper (II) sulphate using a pair of copper electrodes. The copper electrodes are “active” meaning they take a part in the electrolysis. First, the electric current passed through the electrolytic cell will cause the copper sulphate solution to dissociate into it’s two component ions, Cu2+ and SO42-. .The copper anode (+) will dissolve and fall into the copper (II) sulphate solution as Cu at the anode is being oxidized to Cu2+ by the newly dissociated SO42- ions and loses electrons, meanwhile, the Copper cathode will pick up Cu2+ ions and reduce them to Cu. Note that Hydrogen does not form at the cathode because copper is lower in the reactivity series and more eager to gain electrons than exist as an ion the solution. Half reactions At the Cathode (-), Cu2+ ions are reduced to Cu by the gain of electrons: Cu2++ 2e- â Cu At the anode (+), Cu is oxidized to Cu2+ ions by loss of electrons to the cathode: Cuâ Cu2 + 2e- Aim/purpose: The purpose of this experiment is to investigate the relationship between quantity of current applied and the mass of substance formed on the cathode. ...read more.

Also, new electrodes and a new lot of Copper (II) sulphate solution could be used for each trial. A Possible Extension to this experiment would be to investigate the relationship between the mass of copper removed from the anode and the current quantity. From observing the half reactions it can be shown that at the cathode, Cu is formed, and on the anode, Cu2+ is formed proportionally and falls into the solution. According to faradays law, quantity of current is directly proportional to mass deposited at the cathode. As the mass lost from the anode should be equal to the mass deposited on the cathode, therefore, the magnitude of mass lost at the anode should also be proportional to the current quantity. This experiment design has an advantage in that mass of copper gained at the cathode could be misplaced and fall to the bottom of the solution or wash off when cleaning and drying, while measuring the mass lost at the anode is much more effective as nothing will fall off from the anode that was not already converted into Cu2+. Also, one could test time instead of current Conclusion The group was not satisfied with the results obtained in the experiment. The experimentally determined mass was not accurate to the theoretical mass nor did it prove the qualitative prediction of a directly proportional relationship between the two variables. the determined mass was larger than the theoretical mass by a factor of 10 for the first trial at 0.2 amps, this was ruled out as an outlier while, all the other results after than remained at an almost constant rate of gain in mass of approximately 0.008 grams throughout changing the current from 0.4 amps to 1.2 amps. Strangely enough, this value of mass gain was the expected theoretical mass value for a current of of 0.02 amps. Either the variable resistor did not change current from 0.2 amps, or mass was lost from washing and drying the cathode or some other reason. ...read more.