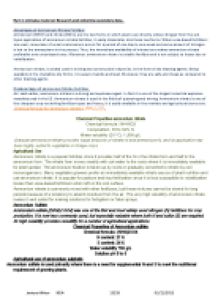 Research into the production of Nitrate Fertillisers.

﻿Part 1: stimulus material: Research and collecting secondary data. Advantages of Ammonium Nitrate Fertilizer Ammonium (NH4+) and nitrate (NO3-) are the two forms in which plants can directly utilize nitrogen from the soil. Upon application of ammonium nitrate fertilizer, it easily dissociates into these two forms. When urea-based fertilizers are used, conversion of urea to ammonium occurs for a period of one day to one week and some amount of nitrogen is lost to the atmosphere in the process. Thus, the immediate availability of nitrate ions makes ammonium nitrate preferable over urea-based ones. Moreover, ammonium nitrate is a stable fertilizer and is not subject to losses due to volatilization. Ammonium nitrate, is widely used in mining and construction industries, in the form of dry blasting agents. Being available in the crystalline dry forms, it is easy to handle and load. Moreover, they are safe and cheap as compared to other blasting agents. Disadvantages of ammonium Nitrate Fertilizer As I said earlier, ammonium nitrate is a strong and explosive agent. ...read more.

Ammonium nitrate is commonly mixed with other fertilizers, but these mixtures cannot be stored for long periods because of a tendency to absorb moisture from the air. The very high solubility of ammonium nitrate makes it well suited for making solutions for fertigation or foliar sprays. Ammonium Sulfate Ammonium sulfate [(NH4)2 SO4] was one of the first and most widely used nitrogen (N) fertilizers for crop production. It is now less commonly used, but especially valuable where both N and sulfur (S) are required. Its high solubility provides versatility for a number of agricultural applications. Chemical Properties of Ammonium sulfate Chemical formula: (NH4)2SO4 N content: 21% S content: 24% Water solubility 750 g/L Solution pH 5 to 6 Agricultural use of ammonium sulphate Ammonium sulfate is used primarily where there is a need for supplemental N and S to meet the nutritional requirement of growing plants. used in flooded soils for rice production, where nitrate-based fertilizers are a poor choice due to denitrification losses. ...read more.

Ammonium sulphate is formed by reacting ammonia with sulphuric acid. Phosphate fertilisers The production of phosphate fertilisers also involves a number of processes. The first is the production of sulphuric acid through the contact process. Sulphuric acid is then used in a reaction that produces phosphoric acid. Phosphoric acid can then be reacted with phosphate rock to produce triple superphosphates. The production of sulfuric acid Sulfuric acid is produced from sulphur, oxygen and water through the contact process. In the first step, sulphur is burned to produce sulphur dioxide. This is then oxidised to sulphur trioxide using oxygen in the presence of a vanadium(V) oxide catalyst. Finally the sulphur trioxide is treated with water to produce 98-99% sulfuric acid. Nutrients are very important for life to exist. An essential nutrient is any chemical element that is needed for a plant to be able to grow from a seed and complete its life cycle. The same is true for animals. A macronutrient is one that is required in large quantities by the plant or animal, while a micronutrient is one that only needs to be present in small amounts for a plant or an animal to function properly. ...read more.