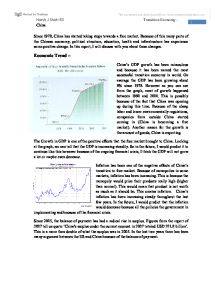 Since 1978, China has started taking steps towards a free market. Because of this many parts of the Chinese economy, political structure, education, health and infrastructure has experience some positive change. In this report, I will discuss with you about these changes. Economic Trend - China's GDP growth has been miraculous and because it has been named the most successful transition economy in world. On average the GDP has been growing about 8% since 1978. However as you can see from the graph, most of growth happened between 1990 and 2000. This is possibly because of the fact that China was opening up during this time. Because of the cheap labor and lower environmentally regulations, companies from outside China started coming in (China is becoming a free market). ...read more.

This creates inflation. China's inflation has been increasing steady throughout the last few years. In the future, I would predict that the inflation would decrease because all the policies the government in implementing and because of the financial crisis. Since 2005, the balance of payment has had a radical rise in surplus. Figures from the report of 2007 tell us quote 'China's surplus under the current account in 2007 totaled USD 371.8 billion'. This is a more than double of what the surplus was in 2005. In the last two years there has been many argument between the US and China because of the balance of payment. 3 Main Economic Problems that China faces 1. Government Control I don't think that China will successfully become a free market. There is too much government control. ...read more.

This is creating a growing difference between incomes between the north and the south. The Chinese government has created more jobs in north. This can be done by giving companies from outside China cheap land in the north. 3. Booms Lately there has been growing concerns about the economic boom, China is facing right now. This is concern because this boom may result to high inflation. This boom can also be followed by a recession. This is because the boom will make companies increase prices (to make maximum profit). This will make inflation higher. Goods and Services will cost more. Consumers won't spend as much money. This will start a recession. I think the Chinese government show start stabilizing the economy. This will only happen if the Chinese government increases the value of the Yuan. ?? ?? ?? ?? ...read more.