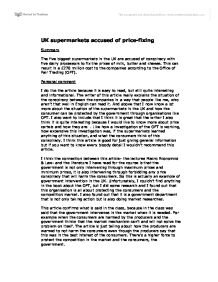 Economic Article Commentary - The five biggest supermarkets in the UK are accused of conspiracy with five dairy processors to fix the prices of milk, butter and cheese.

The five biggest supermarkets in the UK are accused of conspiracy with  five dairy processors to fix the prices of milk, butter and cheese. This can result in a £270 million cost to the companies according to the Office of Fair Trading (OFT).

I do like the article because it is easy to read, but still quite interesting and informational. The writer of this article really explains the situation of the conspiracy between the companies in a way that people like me, who aren’t that well in English can read it. And above that I now know a lot more about the situation of the supermarkets in the UK and how the consumer can be protected by the government through organisations like OFT. I also want to include that I think it is great that the writer I also  think it is quite interesting because I would like to know more about price cartels and how they are  . Like how a investigation of the OFT is working, how expensive this investigation was, if the supermarkets learned anything of this situation, and what the consumers think of this conspiracy. I think this article is good for just giving general information but if you want to know every bloody detail I wouldn’t recommend this article.

I think the connection between this article- the lectures Macro Economics & Law- and the literature I have read for the course is that the government is not only intervening through maximum prices and minimum prices, it is also intervening through forbidding any price conspiracy that will harm the consumers. So this is actually an example of government intervention in the UK. Unfortunately, I couldn’t find anything in the book about the OFT, but I did some research and I found out that this organisation is all about protecting the consumers and the competition market. I also found out that it is a government department that is not only taking action but is also doing market researches.

I think this article is really good to illustrate an example of intervention in the market to protect consumers and the competition because it is in simple words and it is something that could happen in the Netherlands to. Just think of the conspiracy of beer brands. I also think this article is quite educational because it learns us that, even we already knew, the producers are almost always thinking about themselves and the consumers come second. This article can be used to illustrate this because it has a clear point of view and the opinion of the writer is not too present.

House prices across much of Western Europe have stalled or begun to fall as spiralling borrowing costs and fears of over-supply take their toll on markets from Ireland to Spain, an industry survey has revealed.

The German housing market has been hit hardest.

I think the link between this article- the lectures Macro Economics & Law- and the literature I have read for the course is that you can see the supply-price theory in this article. In the lectures we discussed the reaction of the price when the supply changes. If the supply goes up, the price goes down and vice versa. In this article this reaction is shown well because you see that the over-supply of houses leads to falling down of the prices. This reaction has a cause that we haven’t discussed yet but it is relevant. The housing market has dropped because of a crisis in the credit market. Many people have a changing interest on their mortgage. If there is a crisis on the credit market, like now, their interest will raise and the people have to pay more interest. Because of that people with a poor credit history can not pay it anymore, which causes a forced sale.

This article partly contradicts and partly confirms what has been discussed in the lectures. The relation between supply and price in the article confirms what has been discussed in the lectures, but in the lectures was the market mechanism also explained. This means that the market should recover on itself. If the supply increases, the prices go down, the demand increases, the price raises. This is not happening on the housing market. Maybe it needs some more time, or maybe the credit market has to improve first.

This article can be used to illustrate the reaction of price on the over-supply, but maybe it is a little bit to complicated, because of the not working market mechanism. There are so many circumstances that effect the housing market that it is not that easy to use as an example. I do think this article could be educational, because you can learn a lesson. If you have changing interest on your mortgage you have more risk in times like these. This article can illustrate this because it has an objective view and it had a lot of information. It also shows what can go wrong.

Reputations on the line as court rules on Commission's

The European Court of Justice will deliver its verdict on a decision by the European Commission in March 2004 to find Microsoft guilty of illegal business practices. The Commission ordered the software group to make concessions to competitors and fined it € 497 million.

At first I did not like the article, because there were a lot of difficult words. But after I looked some things up, I finally understood what was said, and I even thought it was interesting. I do like the article because it has learned me the situation around Microsoft. This is quite interesting to know because almost everyone is using Microsoft, including me. So it is important to know if Microsoft is playing dirty, I will keep that in mind. One thing that I think is quite good about the article is that even though I haven’t read anything about this case before I do know what happened in the last few years. In article they say what, when happened.

I think the connection between this article- the lectures Macro Economics & Law- and the literature I have read for the course is that this article is about what the Court of Justice and the European Commission do. In the class we talked about the functions of the institutions of the EU, and this is about two institutions. In the book is explained that the if citizens, companies, member states or EU organisations can bring conflicts related to EU agreements before the European Court of Justice. And that is what Microsoft is doing, it is trying to change the verdict the European Commission made.

I think the article partly confirms what is discussed in the lecture and what is told in the book, because this is just an example of how the European Union works. The European Commission had critics on Microsoft’s practices and said that Microsoft abused their market position. The Commission fines Microsoft €497 million. Microsoft does not want to pay that and went to the European Court of Justice to annual the verdict. That’s exactly what is said in the book about the function of the two institutions. Only there is one thing that is not the same. In the book there is said that the European parliament it is main tasks is to see if the rules are followed. The book does not say that the European Commission can de that to. The function of the Court of Justice is the same.

I do think it can illustrate the way how these two institutions of the EU are working together, because this article shows that they one case can go from the Commission to the Court of Justice. It is a good example for that, but it is a little bit difficult because there a contradiction of the definition of the European Commission. I do think this article is educational because it has information about two currently important things. The European Union and the market position of Microsoft. Better said, the negative things of Microsoft’s position and abuse of it.

(Rory Watson, 9/17/2007) Reputations on the line as court rules on Commission's Microsoft fight.