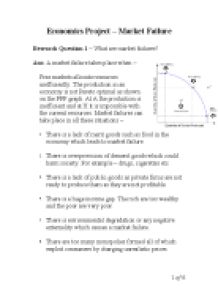 ﻿Economics Project ? Market Failure Research Question 1 ? What are market failures? Ans. A market failure takes place when ? Free markets allocate resources inefficiently. The production in an economy is not Pareto optimal as shown on the PPF graph. At A the production is inefficient and at X it is impossible with the current resources. Market failures can take place in all these situations ? 1. There is a lack of merit goods such as food in the economy which leads to market failure. 1. There is overprovision of demerit goods which could harm society. For example ? drugs, cigarettes etc. 1. There is a lack of public goods as private firms are not ready to produce them as they are not profitable. 1. There is a huge income gap. The rich are too wealthy and the poor are very poor. 1. There is environmental degradation or any negative externality which causes a market failure. 1. There are too many monopolies formed all of which exploit consumers by charging unrealistic prices. ...read more.

Some firms might not want high permits and might sell some of theirs. Others might buy from them as they are unable to cut down on their greenhouse gas emissions. 2 of 6 Economics Project ? Market Failure Research Question 3 / 4 ? How effective is the use of taxation and subsidies? What are the opportunity costs? Ans. The efficacy is as follows ? Uses of taxes ? 1. Raises revenue for the government which is spent on providing public goods such as defence and merit goods such as food for the poor. It can also be used to offset the interest on national debt. 1. Environmental taxes help reduce pollution and other negative externalities. Landfill taxes, plastic bag taxes etc. are new taxes which reduce social costs. Demerit taxes help to reduce the production of demerit goods which are harmful for society such as cigarettes. Causes for inefficacy of taxes and opportunity costs ? 1. Most demerit goods have an inelastic demand. Thus, the producers can pass on most of the burden of the tax on the consumers by hiking the prices. ...read more.

Food for everyone can be merit good. 1. Maintain or increase the revenue of producers during tough times such as a recession or economic downturn. Subsidies help producers raise their profit margins and would therefore save them from getting bankrupt during a recession. 4 of 6 Causes for inefficacy of subsidies and opportunity costs ? 1. Subsidies tend to distort the market prices as at times only certain industries and firms are given subsidies. This can lead to misallocation of resources and can end up in a market failure itself. 1. Subsidies provide arbitrary assistance. If a certain firm is favoured by the government it will be given more subsidies. Furthermore, fraud can take place as subsidies can be allocated unwisely. 1. The financial cost of the subsidies can at times be too high. This leads us to think whether that much government revenue could be put to another use such as defence or street ? lighting. This is a major opportunity cost of giving subsidies. 1. The ones who pay for the subsidy, consumers (taxpayers) might not always benefit from the subsidies and thus the ones who pay are not always the ones who benefit thus making subsidy payments unfair. ...read more.