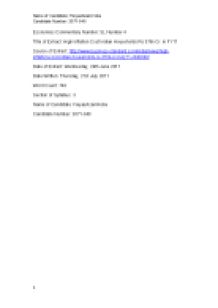 In the absence of these measures, high food inflation is here to stay, the report added. ________________ According to the article, rising prices of food items, petroleum and other commodities in India have increased consumer expenditure from 45,000 Crore rupees in 2008-2009 to 3,76,000 Crore rupees in 2010-2011. The brunt of these food price hikes have been mainly felt by the poor and vulnerable families. On the other hand, the prices of durable goods like electronics have fallen down which mainly benefits middle to higher income groups. All in all, if the government doesn?t boost food production, then high food inflation will be prevalent for a long time. GDP, gross domestic product, is the total quantity of goods and services produced domestically within a country in the span of one year. Economic growth is when there is an increase in a country?s GDP. Inflation is a consistent increase in the general price level of goods which leads to a fall in the purchasing power or value of money. Figure 1 Massive increase in private consumption expenditure is most likely due to an increase in population of the ?upper and middle class?. Demand-pull inflation is the result of the aggregate demand growing too quickly compared to that of supply-side capacity which results in excess demand for goods. ...read more.

Supply side policies are those that seek to increase supply thereby lowering inflation. The government should use more of supply side policies in strengthening the food production industry. Firstly, the government could set up first class training and education centres for employees in the food production industry, which will improve labour productivity and eventually, the aggregate supply. Over a period of five to ten years, the government can rotate subsidies on various types of training programs. In the short run, its effects will not be felt as education and training are long term endeavours but eventually it will benefit the economy by boasting a more skilled and efficient labour force, thereby reducing cost of production and increasing food supply. Secondly, another option would be subsidising the India?s food production industry: Agriculture. To increase production, the Indian government could introduce new irrigation methods, better cultivation strategies, more efficient transport systems etc. to farmers in more rural areas. Moreover, the government can proactively draw the attention of worldwide fertilizer companies who are looking to enter a new market or showcase their new products; the farmers will also benefit from an increased yield. Benefits to both parties have short term as well as long term connotations and more importantly, food inflation will leave the face of India for good. ...read more.