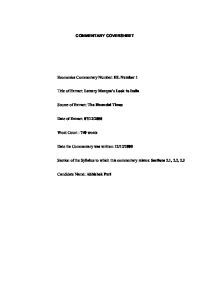 COMMENTARY COVERSHEET Economics Commentary Number: HL Number 1 Title of Extract: Luxury Marque's Look to India Source of Extract: The Financial Times Date of Extract: 07/12/2008 Word Count : 740 words Date the Commentary was written: 12/12/2008 Section of the Syllabus to which this commentary relates: Sections 2.1, 2.2, 2.3 Candidate Name: Abhishek Puri Luxury marques look to India By Joe Leahy in Mumbai Sunday Dec 7 2008 18:25 The moves come as Tata Motors faces increasing criticism over its $2.3bn takeover of the two luxury marques, which analysts say do not fit with its stable of lower-cost trucks, commercial vehicles and cars. The acquisition is also looking ill-timed. Tata Motors is struggling to refinance a $3bn bridge loan used for the takeover, leading to successive downgrades by credit ratings agencies. Analysts say the collapse in Tata Motors' domestic market is also a concern. Truck and car sales have fallen by up to 50 per cent in recent months, forcing Tata and its rivals to suspend production at various plants. ...read more.

As a result, there has been an increase in demand for luxury goods. Luxury good is a commodity for which demand increases as income rises. Income Elasticity of demand is the responsiveness of quantity demanded of a good through a change in income of the people demanding the good. These luxury cars are income elastic, and due to the fact that wages are rising in India thanks to the booming economy, demand for these luxury cars has increased. Therefore, this justifies its move to introduce its new luxury subsidiaries to the Indian market because good sales of these highly priced cars could make up for the sales slump seen for its low cost cars as these luxury cars could sell better. Most developed countries such as the United States and Western Europe have seen little economic growth and are going through an economic recession. From common knowledge, we know that thousands and millions of jobs are being cut or wages have been sliced because firms aren't able to generate enough revenue. ...read more.

Therefore, Tata Motors has correctly shifted the attention of its Luxury Marques to India where there is still an opportunity to create revenue from Jaguar and Land Rover. This might be supported by the fact that the majority of the Indian population is from the middle class who have seen an increase in standard of living and an increase in wages due to the economic boom, therefore increasing investments in luxury brands. However, the impact of a global recession will almost certainly be seen in India as well where job cuts have been seen as firms have been losing revenue. Therefore, Tata Motors has to be cautious about its sales strategies as Land Rover and Jaguar may not be long term successes in India and might face a similar fate as they did in the West even though they may make a respectable amount of revenue before the markets react extremely to the global economic meltdown. Adding to this, though the introduction of luxury marques in India is a positive indication of an increase in income and economic growth, at the same time, this creates a negative externality for the community through diseases and creates a burden on other sectors, especially the healthcare system. ...read more.