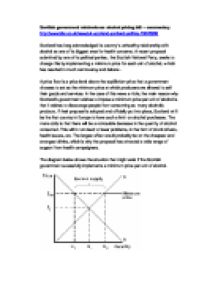 Scottish government reintroduces alcohol pricing bill - commentary http://www.bbc.co.uk/news/uk-scotland-scotland-politics-15525950 Scotland has long acknowledged its country's unhealthy relationship with alcohol as one of its biggest area for health concerns. A recent proposal submitted by one of its political parties, the Scottish National Party, seeks to change this by implementing a minimum price for each unit of alcohol, which has resulted in much controversy and debate. A price floor is a price level above the equilibrium price that a government chooses to set as the minimum price at which producers are allowed to sell their goods and services. ...read more.

The more odds is that there will be a noticeable decrease in the quantity of alcohol consumed. This will in turn lead to fewer problems, in the form of drunk drivers, health issues, etc. The largest effect would probably be on the cheapest and strongest drinks, which is why the proposal has attracted a wide range of support from health campaigners. The diagram below shows the situation that might exist if the Scottish government sucessfully implements a minimum price per unit of alcohol. ...read more.

The government must also consider what effects a minimum price for alcohol would have on local pubs and taverns. Those who attempt to make an honest living from producing good-quality alcohol will most likely be affected just as much, if not more so, than the large companies who produce cheap but effective alcohol. In conclusion, I believe that the Scottish government should implement a minimum price per unit of alcohol. Although there might be some negative consequences, the price floor would serve to help solve Scotland's drinking problem. ?? ?? ?? ?? ...read more.