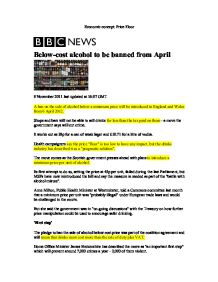 Economic Commentary: Price Floor - A ban on the sale of alcohol below a minimum price will be introduced in England and Wales from 6 April 2012.

Economic concept: Price Floor Below-cost alcohol to be banned from April 8 November 2011 last updated at 16:07 GMT A ban on the sale of alcohol below a minimum price will be introduced in England and Wales from 6 April 2012. Shops and bars will not be able to sell drinks for less than the tax paid on them - a move the government says will cut crime. It works out as 38p for a can of weak lager and �10.71 for a litre of vodka. Health campaigners say the price "floor" is too low to have any impact, but the drinks industry has described it as a "pragmatic solution". The move comes as the Scottish government presses ahead with plans to introduce a minimum price per unit of alcohol. Its first attempt to do so, setting the price at 45p per unit, failed during the last Parliament, but MSPs have now reintroduced the bill and say the measure is needed as part of the "battle with alcohol misuse". Anne Milton, Public Health Minister at Westminster, told a Commons committee last month that a minimum price per unit was "probably illegal" under European trade laws and would be challenged in the courts. ...read more.

All the other pricing mechanisms have problems with them, mostly of legality. "I know some opponents say it doesn't tackle enough alcohol products. That may be true, but what it does do is prevent anybody using alcohol as a loss leader which has happened in the past. "That has to be a good thing for both the consumer and the trade. Nobody wants to see stuff at rock bottom prices." http://www.bbc.co.uk/news/uk-politics-15634956 ECA #3 The price of alcohol in England and Wales is set to increase in April of 2012. The government wants to place a price floor (a regulation making it illegal to change a price lower than a specified level, set above equilibrium to be effective) on alcohol as previously it was being sold for less than the tax paid on it. The law of demand states that, ceteris paribus, an increase in a product's price will reduce the quantity of it demanded, and conversely for a decrease in price; however, since the price elasticity of demand (a units-free measure of the responsiveness of the quantity demanded of a good to a change in its price when all other influences on buyers' plans remain the same) ...read more.

On the other hand, middle and higher income households will continue to demand alcohol as most of them will still be able to afford it. In the short run, since it is likely that there will be a small surplus of alcohol at the price of PF, producers may slow down production. This is because the surplus at PF could be used as stock. Hence, producers will deplete their existing stock of inventory to meet their current demand. However, in the long run, if the government is able to strictly enforce the same price floor, then the producers may adjust their production to get rid of the surplus. Therefore, as a result, the supply curve may gradually shift to the left (decrease) to establish a new equilibrium at the floor price. In addition to this, the government may decide to closely monitor businesses and bars as well as re-enforce the penalties which may result if the price floor is not followed so that a Black Market (illegal trading arrangement in which buyers and sellers do business at a price that is lower (in the case of floors) than the legally imposed price) will not occur. ...read more.