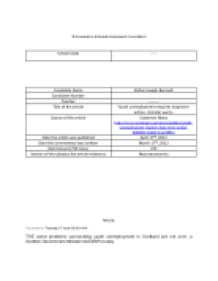 ﻿IB Economics: Internal Assessment Coversheet School Code ----- Candidate Name Stefan Joseph-Bennett Candidate Number Teacher -------- Title of the article Youth unemployment requires long-term action, minister warns Source of the article Scostman News http://www.scotsman.com/news/politics/youth-unemployment-requires-long-term-action-minister-warns-1-2238853 Date the article was published April 17th, 2012 Date the commentary was written March 17th, 2012 Word Count (750 max.) 745 Section of the syllabus the article relates to Macroeconomics Article: Published on Tuesday 17 April 2012 14:41 THE worst problems surrounding youth unemployment in Scotland are not over, a Scottish Government Minister told MSPs today. Despite statistics showing a rise in jobs on offer, Minister for Youth Employment Angela Constance said that such a claim would be foolish. She said that improvements in Scotland?s economy would resolve some problems of getting young people into work. But she added that, in the long-term, work is needed to help those facing ?considerable barriers?. Constance?s remarks came as she appeared before Holyrood?s Education Committee to answer questions on the Scottish Government?s Youth Employment Strategy, and ahead of the publication of the latest job figures tomorrow. ...read more.

rates of 25% due to ?disadvantaged backgrounds?. This can most likely be assumed that these people have had a lack of education and do not have the sufficient skills to apply for the desired jobs. This could be labeled as a ?skill mismatch? between workers? skills and employers? needs. Unemployment can have a significant negative impact on a country?s economy and society. As the unemployment level rises, the more people are eligible for benefit payments (money given to the unemployed to consume basic necessities) which take away from the government?s revenue and spending power. Secondly, and most importantly, unemployment can cause a waste of resources and reduce the nation?s output which will lower the economy?s GDP. With this loss of the nation?s output, the economy will be producing within its PPF (Production Possibility Frontier: ability to produce ALL available resources efficiently) and lowers/decreases economic growth. The following labor market diagram can depict what unemployment the market is facing. As seen in the diagram, the labor market is shown in a simple AD/AS model. ...read more.

towards increased spending for the education sector. The government can lower the number of un-educated workers/youths that lack adequate skills by subsidizing education and implementing better training for jobs. Currently, the aggregate supply for young Scottish workers lies on the ?AS Labor? curve as firms can?t hire the un-skilled workers. This leads the real GDP, or the output of the country to be lower as goods and services aren?t being produced at maximum efficiency due to the lack of workers. The long-run solution that is alluded in the text would definitely be to improve the education system because currently the economy is running on spare capacity (producing at less than maximum efficiency). The economy would have to bare with the supply crisis until the workers have acquired the adequate skills. If the re-evalution of the fiscal policy is used by the Scottish government, then they can potentially fix this skill-mismatch issue and avoid disastrous economic problems. Lastly, to ensure economic safety, the Scottish government should restrain from borrowing money and spend money on other projects to allow them to fix their problem. This could hinder the development in other sectors as the money available to them should be placed towards education. ...read more.