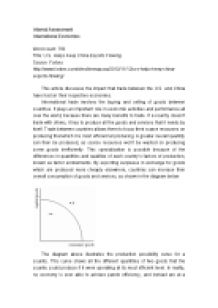 Trade between the US and China - International IA Commentary

﻿Internal Assessment International Economics Word count: 750 Title: U.S. Helps Keep China Exports Flowing Source: Forbes http://www.forbes.com/sites/kenrapoza/2012/11/12/u-s-helps-keep-china-exports-flowing/ This article discusses the impact that trade between the U.S. and China have had on their respective economies. International trade involves the buying and selling of goods between countries. It plays an important role in economic activities and performance all over the world, because there are many benefits to trade. If a country doesn?t trade with others, it has to produce all the goods and services that it needs by itself. Trade between countries allows them to focus their scarce resources on producing that which it is most efficient at producing. A greater overall quantity can then be produced, as scarce resources won?t be wasted on producing some goods inefficiently. This specialization is possible because of the differences in quantities and qualities of each country?s factors of production, known as factor endowments. ...read more.

As trade enables a country to import different goods from various countries, it is beneficial to consumers because they are given more choice and variety. An increase in competition due to foreign firms forces domestic firms to become more efficient, as failure to do so means selling at higher prices than imported products and the likelihood of eventually going out of business. Increased efficiency in production would result in lower costs for consumers, which is another benefit of trade for consumers. The large amount of trade between the U.S. and China makes the two countries interdependent on each other, as the U.S. needs Chinese imports in order to maintain its high consumption levels and China needs the U.S. in order to keep earning from export revenues. The strong international trade links between these two countries reduce the possibility of war or other hostilities occurring between them. ...read more.

Appreciation and depreciation results from changes in demand or supply for the currency. A downside of this system is that the government has no control whatsoever over the currency value. In the case of extensive borrowing being made over long periods of time, the risk of defaulting on loans would make the U.S. Dollar unattractive to other countries. The subsequent decrease in demand would cause the value of the U.S. Dollar to plummet rapidly. This in turn might bring about cost-push or demand-pull inflation. In addition, because the value of the curency decreases, the value of whatever national debt is already present will increase. In conclusion, international trade has many benefits, as shown by the relationship discussed in the article ? the U.S. is able to consume at a level greater than what it would be capable of consuming at if no trade were possible, and China earns money from its export revenues. ...read more.