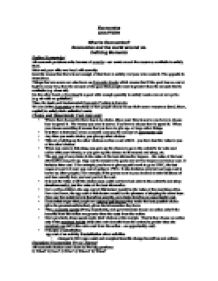 What is Economics? What do Economists do?

Economics CHAPTER1 What Is Economics? Economics and the world around us. Defining Moments Define Economics: All economic problems arise because of scarcity: our wants exceed the resources available to satisfy them. Rich and poor alike are faced with scarcity. Scarcity means that there is not enough of that item to satisfy everyone who wants it. The opposite is abundance. Things that are scarce are also know as Economic Goods, which means that if the good has no cost or is given away free, then the amount of the good that people want is greater than the amount that is available (e.g. clean air). On the other hand a Free Good is a good with enough quantity to satisfy wants even at zero price (e.g. air with no pollution). Thus, the basic and fundamental Economic Problem is Scarcity. We can define Economics as the study of how people choose to use their scarce resources (land, labor, capital) to satisfy their unlimited wants. Choice and Opportunity Cost (opp cost) � Where there is scarcity there has to be choice. Since your time is scarce you have to choose how to spend it. ...read more.

2) How are goods and services produced? Do we use people or machines to produce the goods? 3) Who consumes the G&S that are produced? For Whom The answer depends partially on the distribution of income. Then, What determines what we earn? 4) Where are goods and services produced? Do we produce goods in Japan, in Mexico, or in the US? 5) When are G&S produced? Production varies over time: seasonal factors, business cycle Eight ideas that define the Economic way of thinking Idea 1: Every choice involves a cost. Whatever we choose to do, we could have done something else instead. A choice is a tradeoff - we give up something to get something else - and the highest valued alternative we give up is the opportunity cost of the activity chosen. Idea 2: We make choices in small steps, that is, at the margin... choices are influenced by incentives. When deciding whether to allocate more or less resources to an activity, the decision is not "all or nothing" but "a little bit more" versus "a little bit less": we make choices at the margin. MB vs. ...read more.

An economic theory is a generalization that summarizes what we think we understand about the economic choices that people and firms make. Cause and Effect / Logical Fallacies: To understand the role of each factor in producing an effect, we want to hold all other factors constant and change just the factor we are interested in. 1) Ceteris Paribus Fallacy Ceteris paribus is a Latin phrase, meaning "everything else remaining the same." E.g. if the price rises and sales rise as well, to conclude that a higher price brings about greater sales is a ceteris paribus fallacy. However, It is difficult to vary only one variable when testing economic models. 2) Fallacy of Composition The statement that what is true of the parts is true of the whole, or what is true of the whole is true of the parts. Example: "Speed kills." 3) The False-Cause Fallacy or Post Hoc Fallacy The error of reasoning that a first event causes a second event because the first occurred before the second. � Economic policy objectives � economic efficiency � equity � economic growth � economic stability � The economy allocates scarce resources among competing uses � The economy consists of Economic Agents: � decision makers - households, firms, governments � markets � goods markets - for goods, services � factor markets - for labor, land, capital, entrepreneurial ability ...read more.