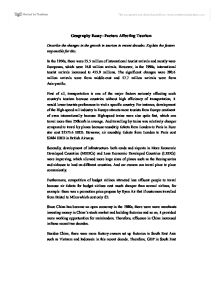 Geography Essay- Factors Affecting Tourism Describe the changes in the growth in tourism in recent decades. Explain the factors responsible for this. In the 1950s, there were 25.5 million of international tourist arrivals and mostly were Europeans, which were 16.8 million arrivals. However, in the 1990s, international tourist arrivals increased to 455.9 millions. The significant changes were 280.6 million arrivals were from middle-east and 57.7 million arrivals were from Asia-pacific. First of all, transportation is one of the major factors seriously affecting each country's tourism because countries without high efficiency of transportation, it would lower tourists preferences to visit a specific country. For instance, development of the High-speed rail industry in Europe attracts more tourists from Europe continent of even internationally because High-speed trains were also quite fast, which can travel more than 250km/h in average. ...read more.

and Less Economic Developed Countries (LEDCs) were improving, which allowed more large sizes of planes such as the Boeing series and airbuses to land on different countries. And car owners can travel place to place conveniently. Furthermore, competition of budget airlines attracted less affluent people to travel because air tickets for budget airlines cost much cheaper than normal airlines, for example: there was a promotion price propose by Ryan Air that if customers travelled from Bristol to Milan which cost only �5. Since China has became an open economy in the 1980s, there were more merchants investing money in China's stock market and building factories and so on, it provided more working opportunities for mainlanders. ...read more.

Therefore, travel agencies would advertise their most recent plans to attract customers by placing adverts in newspapers, magazines or advertise their plans on television, internet or even broadcasting stations and so on. For instance, before school holidays started, Hong Thai Travel and Wing On Travel would advertise their promotion packages through newspapers and broadcast then on television. In addition, more customers chose eco-tours in these recent years because many people's lifestyle changed (more leisure time) nowadays, which they preferred to have a healthy holiday and more adventurous holiday. And there was a trend that we have to live with nature in harmony. Promoting visits to rainforests and other unspoiled natural environment could help the growth of tourism. In a nutshell, these factors could possibly affect the growth of tourism. ?? ?? ?? ?? ...read more.

A good, but at times a bit general, overview of some of the factors that have influenced the growth of tourism in recent years. This could be strengthened further by incorporating more data and examples in places. A conclusion is also needed.
3 stars