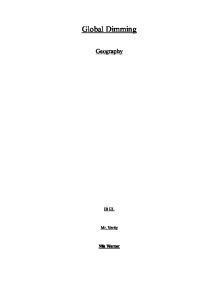 Global Dimming Geography IB HL Mr. Verity Nils Werner Global Dimming Global dimming is an alarming phenomenon. Visible pollution particles that are released into the atmosphere when fossil fuels are burned cause global dimming. Similar to global warming, this process changes rainfall patterns worldwide. The amount of sunlight reaching the surface of the earth in the Middle-Eastern region has decrease by twenty-two percent because more sunlight is being reflected back into space. The visible pollutant particles from burning fossil fuels reflect sunlight and cause an increase in precipitation by causing more droplets to form. This causes clouds to reflect even more sunlight. It is very likely that global dimming has been disguising the negative effects of global warming by stopping some of the sun's energy from reaches the surface of the earth. A worldwide effort is being done to a control or limitation on pollution. There is a very possibility that as the air becomes less polluted by soot and sulphur dioxide, global dimming will decrease, consequently causing the effects of global warming to increase. America is a more economically developed country and is experiencing a very high level of global dimming due to their level aviation travel. ...read more.

Particle pollution was considerably unknown to scientists. The visible pollution particles emitted as green house gasses added to the drastic affect of global dimming. They discovered that there was a three-kilometer thick layer of polluted cloud over the northern islands of Maldives. The clouds block sunlight from reaching the earth's surface or reflect the sunrays. The highly polluted clouds reflect sun light with an increase of ten percent. The polluted clouds act like giant mirrors. Rain only forms when water vapor in the atmosphere starts to condense on the surface of natural occurring air born particles like pollen or sea salt. Water droplets enlarge and then fall as rain. Particle pollution consequently creates rain more often and easier. Currently there are ten times more pollution particles in the atmosphere. Air pollution cause more often rain that what would naturally occur. Concluding that more small droplets reflect more sun light than fewer big ones. So polluted clouds are reflecting more sun light back into space, preventing heat from the sun getting through therefore cooling the earth's surface. The polluted clouds shield the oceans from the sun light therefore decrease pan evaporation rate. There is a direct link between global dimming and whether disturbances and global warming. ...read more.

The vast amount of carbon dioxide released by forest fires in the Amazon will further worsen the affect of global warming. Within only one century the world's average temperature will have become ten degrees Celsius hotter. This climate change will be the most rapid alteration to the planets climate in the history of the earth. If we reduce our particle pollution drastically and do nothing about green house gas emissions, our present day will not be considered as a prediction but of a warning of what is inevitable. Nations worldwide need to tackle the root causes of global dimming as well as global warming by reducing them at an equal rate to save future generation and nature. The temperature increase will cause the release of a vast natural store of greenhouse gas larger than all the oil and coal reserves of our planet. The destabilization of methane hydrates under the ocean will cause global warming to reach a formidable level. At this point, nothing can be done to prevent it. Ten thousand billion tons of methane which is a greenhouse gas eight times as strong as carbon dioxide is due to be release into the atmosphere because of the incline in global temperatures. The climate will reach temperatures inexperienced in four billion years. This is not a prediction - it is a warning. Just keep on polluting and hope global dimming will protect us, would be suicidal. ...read more.