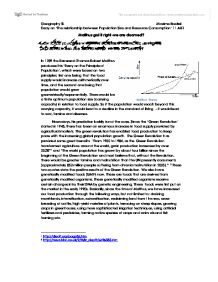 Malthus got it right-we are doomed?

Malthus got it right-we are doomed? How far do you agree with this statement when discussing the population-resource relationship in the 21st century? In 1789 the Reverend Thomas Robert Malthus produced his 'Essay on the Principle of Population', which were based on two principles: first one being that the food supply would increase arithmetically over time, and the second one being that population would grow geometrically/exponentially. There would be a finite optimum population size (carrying capacity) in relation to food supply. So if the population would reach beyond this carrying capacity, it would lead to a decline in the standard of living - it would lead to war, famine and diseases. Nowadays, his prediction luckily is not the case. Since the 'Green Revolution' started in 1945, there has been an enormous increase in food supply provided by agricultural markets. The green revolution has enabled food production to keep pace with the increasing global population growth. The Green Revolution has provided some great benefits: "From 1950 to 1984, as the Green Revolution transformed agriculture around the world, grain production increased by over 250%"1 and "The world population has grown by about four billion since the beginning of the Green Revolution and most believe that, without the Revolution, there would be greater famine and malnutrition than the UN presently documents (approximately 850 million people suffering from chronic malnutrition in 2005)."2 These two quotes state the positive results of the Green Revolution. ...read more.

It promoted family planning, restricted early marriage, provided improved health care and looked to improve the status of women. The government also worked on diversifying agriculture, invested in industry and improved trading links. With time, there were changes in general attitude toward family size and people were getting married later. As well, there was an improvement in educational and work opportunities for women. Many transnational companies came to Mauritius because of tax incentives, the Freeport at Port Luis, the large number of educated residents, a considerable amount of cheap labour and the good transportation means present. This would assert to B�serup's theory that "necessity is the mother of invention." Because the population had risen, the government had to take measures to adapt to this growth. It had to improve and diversify agriculture, so proving agricultural intensification and that "population growth causes agricultural growth." It also suggests that a country must improve its technology to be able to support the growing population, and that many technologies will not be taken advantage of if the population is not large enough. Mauritius had to build a Freeport and improve transportation to be able to maintain its population. There are also neo-Malthusians who believe in Malthus' ideas. The Club of Rome are what's called 'Malthus with a computer'. ...read more.

People are using 30% more resources than the earth can replenish each year, which is leading to deforestation, degraded soils, polluted air and water, and dramatic declines in numbers of fish and other species. Sir David King, the British government's former chief scientific adviser, said: "We all need to agree that there's a crisis of understanding, that we're removing the planet's biodiverse resources at a rate which is as fast if not faster than the world's last great extinction."3 I believe that if we indeed run out of inexpensive oil and fall short of food, deplete our fossil groundwater and destroy remaining rainforests, and completely empty the oceans and fill the atmosphere with greenhouse gases that tip the earth's climate into a runaway hothouse with rising ocean levels, we might have to confirm the Malthusian prediction. Yet none of this is inevitable. The idea that improved know-how and voluntary fertility reduction can sustain a high, indeed rising, level of incomes for the world remains correct, but only if future technology enables us to economize on natural capital rather than finding ever more clever ways to deplete it more cheaply and rapidly. But with water scarcity highly increasing in the future and the greenhouse gases polluting our earth, causing water levels to rise, I have to conclude that I'm basically a Malthusian. 1 http://dieoff.org/page36.htm 2 http://news.bbc.co.uk/2/hi/in_depth/6496585.stm 3 http://www.guardian.co.uk/environment/2008/oct/29/climatechange-endangeredhabitats ?? ?? ?? ?? Geography SL Maxime Boekel Essay on 'The relationship between Population Size and Resource Consumption' 11 ALD ...read more.

An excellent review of the two different theories of resource consumption using relevant quotes and evidence. Potential for more data to be used in places.
5 stars