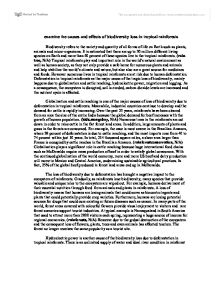 The diversity of species reduced from 164 to 133, a 19% decline due to poor water quality. (news.mongabay, 29th January 2009) As a result of above, the loss of plants and trees in rainforests also causes widespread soil erosion throughout the tropics. Tropical rainforests are stereotyped to be lush and full, but their underlying soils however are very poor. Once there are insufficient tall trees and plants to cover the soils, eventually the rare areas with good soil will be washed away with the heavy rain. As essential nutrients in the soils of tropical rainforests are washed out, soil erosion happens. This is the case in Costa Rica, as it loses approximately 860 million tons of nutrient soil every year due to soil erosion caused by deforestation. Moreover, the Great Red Island of Madagascar loses so much soil to erosion, 400 tons per year, that its rivers run blood-red, polluting the surrounding Indian Ocean. (wikipedia, 4th November 2010) If various trees and plants were preserved, they could continue protecting the good soil from heavy rain, and prevent environmental damage in world-wide rainforests caused by soil erosion. Human migration is the third factor causing biodiversity loss amongst tropical rainforests. ...read more.

Trees produced much oxygen and protected the forest floor from heavy precipitation, where leaves fell to the floor, litter was broken down and nutrients were given to soil, not lost through leaching. However after trees have been cut down for human benefits, there are not enough trees to protect the forest floor from precipitation. There are no leaves, no organic matter, very few nutrients go to soil, and a great deal of nutrients are lost by leaching. With less trees in the rainforests, soil is severely degraded as leaching happens more rapidly. For example, US researchers studied deforested land in Mexico and found that soil levels of phosphorus which is a key nutrient for plants decreased by 44% because the forest's nutrient cycle was affected. (ncbi, 8th May 2010) In conclusion, the several factors that cause the tragic loss of biodiversity in the world tropical rainforests are globalization and cattle ranching, hydroelectric power stations, migration as well as logging. Although people are trying to minimize the negative effects brought to Earth by carrying out afforestation projects and setting up policies to protect rainforests, the consequences continue to put numerous forest lives in danger. Despite the small efforts, the loss of biodiversity in tropical rainforests have led to a disrupted ecosystem and nutrient cycle, soil erosion and a rise in carbon dioxide level. ...read more.

An excellent overview of the causes and effects of biodiversity loss in tropical rainforests.
5 stars.