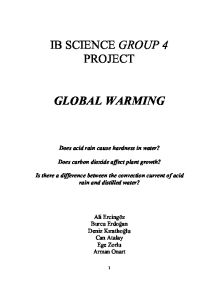 If leather produced after boiling the water this shows that the water only had temporary hardness; because the hardness of the water could be removed by boiling. However if the water did not produce leather when tested with soap after being boiled, this showed that the water was permanently hard and that this hardness can not be removed by boiling, and can be removed through the use of an ion exchange resin. I predict that if the calcium ions being dissolved in the rain water is calcium carbonate, then the water produced will be temporarily hard. This is because calcium carbonate is insoluble, meaning after being dissolved in the acid rain sample, and after boiling this sample, this calcium carbonate can be removed by boiling: Ca(HCO3)2 --> CaCO3 + CO2 + H2O By boiling temporary hard water, the water's softness and purity can be restored again, as the calcium ions will have been removed. Apparatus Apparatus Justification Soap To test for the hardness of the water sample, by seeing whether lather is produced when soap is added to each sample of water. Calcium Carbonate To be dissolved within each water sample (rain and distilled) to see if hard water is produced. Bunsen Burner To boil the sample of rain water if it is was found to be hard, in order to determine whether it is permanently or temporarily hard. Test Tubes To contain a small sample of the water sample after the calcium ions have been dissolved within it (inside the beaker). This is where the sample will be tested for hardness by the soap, so as to see the amount of lather produced more clearly (if the water is soft). Distilled water 1) To dissolve calcium ions, to see if hardness can be caused in pure water. 2) To dilute hydrochloric acid, which will be used instead of rain water (because it would have been unpractical to wait for rain and collect it). ...read more.