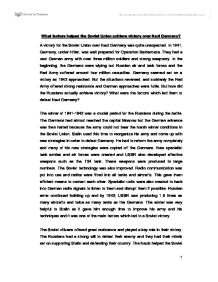 What factors helped the Soviet Union achieve victory over Nazi Germany? A victory for the Soviet Union over Nazi Germany was quite unexpected. In 1941, Germany, under Hitler, was well prepared for Operation Barbarossa. They had a vast German army with over three million soldiers and strong weaponry. In the beginning, the Germans were wiping out Russian air and tank forces and the Red Army suffered around four million casualties. Germany seemed set on a victory as 1942 approached. But the situations reversed, and suddenly the Red Army offered strong resistance and German approaches were futile. But how did the Russians actually achieve victory? What were the factors which led them to defeat Nazi Germany? The winter of 1941-1942 was a crucial period for the Russians during the battle. The Germans had almost reached the capital Moscow but the German advance was then halted because the army could not bear the harsh winter conditions in the Soviet Union. ...read more.

The Soviet citizens offered great resistance and played a key role in their victory. The Russians had a strong will to defeat their enemy and they had their minds set on supporting Stalin and defending their country. The Nazis helped the Soviet Union after witnessing the brutal treatment of the Russians in the areas they controlled. Even the Church played a role in the resistance. The Soviet resistance fighters also sabotaged factories in territories taken over by the German army and blew up rail links just to make it harder for the Germans. The Soviet people helped rebuild the USSR's economy. They dismantled and transported major industrial complexes eastwards by rail, to keep them away and safe from the German army. The Red Army made sure that it destroyed everything that could not be transported so that nothing that would be useful to the enemy would be left behind. Every Russian helped in the war effort in one way or the other. ...read more.

He often interfered with the way his generals organized the army and conducted the war. The soldiers were also not equipped or prepared for the harsh Russian winter and the Germans were not efficient in supplying their troops. German arms production was not as competent as USSR's. Soviet Union allies bombed German industries and hindered their arms production. This made it even harder for them to defeat the Russians. All these factors were finally responsible the Soviet victory over Germany. The harsh winter allowed Stalin to start preparing his army and build up more arms. The technology was improved in this time and the army was strengthened. The Soviet population themselves played a crucial role in the victory as they supported their own country in every fight and defended it against the Germans. Hitler himself made many errors which finally led to their defeat. The Soviet leaders led the army well and without them the victory could not have been possible. Stalin was a skilled and responsible leader, and with his generals, he led the Soviet Union towards victory over Nazi Germany. 1 ...read more.