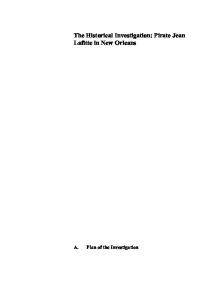 Jean Lafitte and the Battle of New Orleans

The Historical Investigation: Pirate Jean Lafitte in New Orleans A. Plan of the Investigation How did the pirate Jean Lafitte control trade through Louisiana during the 1800s and thus became involved in the Battle of New Orleans? During the War of 1812, the British were occupied with fighting Napoleon in Europe. However, when Napoleon Bonaparte gave up power, the British were free to focus on war with America again. Thousands of British troops then invaded New Orleans and overwhelmed the flaccid American army located there. Nonetheless, through General Andrew Jackson's military brilliance and Jean Lafitte's geographical knowledge the United States were able to drive out the British army, despite being outnumbered three to one. This investigation aims to educate on how an American war hero was able to put aside the fact that Jean Lafitte was a smuggler and allow him to ambitiously fight for America. Included will be the background of the pirate Jean Lafitte, the process in which Jackson admitted Lafitte into the army, and how victory was ultimately achieved. Research will be gathered from a variety of scholarly works and biographies, as well as primary sources in the format of first hand letters. B. Summary of Evidence While Great Britain was at war with France's Napoleon in Europe, the United States eagerly looked to their neighbors to the North; The British ruled Canada, and the opportunity arose to possess more land with an abundance of resources. The young USA was already seeking to raise its worldly status. ...read more.

Here Lafitte realized the dangerousness the waterways from the Gulf of Mexico proposed to New Orleans. Eventually General Andrew Jackson made Edward Livingson his own military secretary. Letters from Livingson to Jackson reveal his friendship to Lafitte, causing him to persuade Jackson to accepted the Lafittes' help (Saxon, 321) C. Evaluation of Sources Saxon, Lyle. Lafitte the Pirate. Post Falls, ID:Century Co. 1930 The first source to be considered is Lyle Saxon's "Lafitte the Pirate." Lyle Saxon was a well respected journalist out of New Orleans who reported for The Times-Picayune. He wrote several books about the history of New Orleans, this being one of them. Being a journalist, Saxon holds access to many articles regarding Louisiana. Thus, information throughout this novel is backed by primary sources from Lafitte or Jackson themselves. The book itself has a very valuable in depth look into the details of the Lafittes' trading system. The text exposes how they took advantage of the citizens of Louisiana financially, and how these people reacted to their situation. By being from New Orleans itself, Saxon has a bias to this perspective. He, although justifiably, favors the side of the towns people. Therefore he portrays Lafiitte as a pirate nonetheless. It is unfortunate that a book or journal from the Lafitte's perspective was not available. Remini, Robert V. The Battle of New Orleans. New York, NY: Penguin (non-classics) 2001 The next source to be considered is Robert V. Remini's "The Battle of New Orleans: Andrew Jackson and America's First Military Victory." ...read more.

E. Conclusion Pirate Jean Lafitte realized the potential of the wealth and resources coming from what was known as the 'New World.' He and his brothers, Pierre in particular, set up shop in Barataria and found a way to intercept the Spanish slave ships and steal their goods and slaves. The pirates then sold these stolen goods to Americans from around the Mississippi. Through this trade and piracy process the Lafitte brothers gained a distinct knowledge of the waterways of the river, along with wealth and an abundance of supplies. When the United States went to war with Great Britain, the British invaded New Orleans with an overwhelming amount of troops. General Andrew Jackson looked to Lafitte and his pirates of Barataria to aid in the battle. Due to their maps and knowledge, along with the keen battle sense of Jackson, the US Army was able to force the British out of bayou and out of New Orleans. After the war, the pirates received nothing but praise. Many claimed that "the amnestied rebels of Barataria in truth, performed miracles" (Davis, 293). Jackson renewed his promise to inform the government of their conduct and lend his support to appeal for pardon. The Lafittes and fellow Baratarians were granted pardon form Louisiana legislature and the president for all violations of any acts of Congress touching on commerce or intercourse with foreign nations prior to January 8, 1815 (Saxon, 245). On February 6, President Madison showed his support in a proclamation which referred to the Baratarians as citizens who had formerly forgotten their duty to the law (Davis, 313). The Lafitte brothers went on to lead a public life, often seen in coffee houses and taverns. F. ...read more.