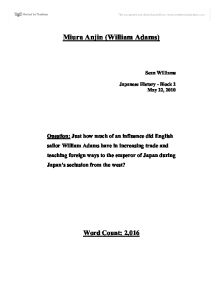 Just how much of an influence did English sailor William Adams have in increasing trade and teaching foreign ways to the emperor of Japan during Japans seclusion from the west?

Miura Anjin (William Adams) Sean Williams Japanese History - Block 2 May 22, 2010 Question: Just how much of an influence did English sailor William Adams have in increasing trade and teaching foreign ways to the emperor of Japan during Japan's seclusion from the west? Word Count: 2,016 William Adams By Sean Williams "...[they] were horrified by the rise of this heretic sea dog... they realized that he posed a serious threat to their relationship with the shogun." (Milton 113) Arriving on the shores of Japan in the year 1600, William Adams was a complete "foreigner" to the Japanese. Showing mixed feelings towards foreigners in Japan, Ieyasu tolerated trade with the English and Dutch, while he had no tolerance for the missionaries. Several seclusion laws, and the Sakoku policy finally cut off Japan to the West, and it spelled the end of the modernization of Japan (at least for several hundred years). Trade was limited to the single island of Deshima, where the Dutch with the Dutch East-India Company were allocated a small artificial island to trade on. Japan now with its closed doors, had no interest in advancing its relations with the "religious" foreigners. ...read more.

From here, things moved quickly for Adams and his relations with Ieyasu. Realizing that Adams' was an Englishmen, and knowing the fact that the English were battling the Portuguese/Spanish with the Dutch, Ieyasu used this to get Adams to achieve something that changed Japan; making a ship. Ieyasu, who did not trust or approve of their troubles in Japan, once again connected with Adams with his disliking of the Portuguese. "Due to the accusations of some of the Portuguese in the region Adams came under suspicion of being a pirate..." Adams was clearly not liked by the Portuguese (mainly remaining Jesuit missionaries). Ieyasu, being the smart man he was, knew that Adams' dislike of the Portuguese would help him to side with him... to accomplish the task of building a ship. Knowing that Adams was a ship's carpenter in England, he gave the task of building a ship with the De Liefde's carpenter, Pieter Janszoon. Together, with the help of many Japanese carpenters, Adams built an astonishing 80-ton vessel that Ieyasu was very keen of. Adams' performance had once again proved helpful, and this strengthened the pairs bond even further. After his "success" in Japan and his growing bond with Ieyasu, Adams hit a period where he wished to return home. ...read more.

William Adams was the key "factor" to Japan's opening of trade wit the west during its time of the Sakoku Policy. He opened up Japan's gates, and brought the nation of isolation and permanent "fear" of the western countries. His strong connection and bond was very crucial to the outcome, as they supported each other in many ways, to bring trade to Japan, and move Japan one step closer to modernization. The result of the beginning of trade with the west signaled Japan's intentions on becoming a better nation, to become a nation recognized by the other nations in the world. Without William Adams, Japan would not have been the same, and we can be very grateful of him for creating the "spark" for the fire of modernization. William Adams was a very crucial man, who made a vital change in Japan's history. Without him, Japan would not have been the Japan that we live in now. Bibliography Books 1) Milton, Giles. Samurai William The Englishman Who Opened Japan. New York: Penguin (Non-Classics), 2003. Print. 2) Makoto, Naito. Foreigners Who Loved Japan. Tokyo: Bilingual Books, 2009. Print. Internet Sources 1) "A Brief History of William Adams." The Virtual Times. Web. 22 May 2010. <http://www.hsv.com/writers/jeffog/wa-hist.htm>. 2) "William Adams the First Englishman in Japan." Art Gallery Artists Sculpture Home Decor Art History and Fine Art Prints. Web. 22 May 2010. <http://www.artsales.com/ARTistory/Xavier/William_Adams.htm>. ...read more.