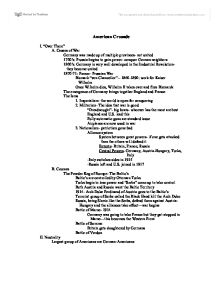 American Crusade I. "Over There" A. Causes of War Germany was made up of multiple provinces- not united 1700's: Prussia begins to gain power- conquer German neighbors 1800's: Germany is very well developed in the Iindustrial Revolution- they become united 1870-71: Franco- Prussian War Bismark "von Chancellor"-- 1860-1890: work for Kaiser Wilhelm Once Wilhelm dies, Wilhelm II takes over and fires Bismarck The emergence of Germany brings together England and France The Isms 1. Imperialism- the world is open for conquering 2. Militarism- The idea that war is good "Dreadnought"- big boats- whoever has the most are best England and U.S. lead this Fully automatic guns are standard issue Airplanes are now used in war 3. Nationalism- patriotism gone bad Alliance system System between great powers- if one gets attacked than the others will defend it Entente- Britain, France, Russia Central Powers- Germany, Austria-Hungary, Turks, Italy -Italy switches sides in 1915 -Russia left and U.S. joined in 1917 B. Courses The Powder Keg of Europe- The Baltic's Baltic's are controlled by Ottoman Turks Turks begin to lose power and "Serbs" come up to take control Both Austria and Russia want the Baltic Territory 1914- Arch Duke Ferdinand of Austria goes to the Baltic's Terrorist group of Serbs called the Black Hand kill the Arch Duke Russia, being Slavic like the Serbs, defend them against Austria- Hungary and the alliances ...read more.

1936 Election -Roosevelt wins -Roosevelt brings together in voting power: blacks, labor unions, big city political machines, urbanites, intellectuals -Through his "New Deal" he got the vote of blacks etc, and maintained the vote of the south. - Court Packing Scheme -Judiciary Act of 1937 -Any Supreme Court Justices over the age of 70 must retire -Is immediately dropped E. New Deal: Pros and Cons CONS -Changed gov't fundamentally -Didn't get rid of the Depression -Deficit spending-42 billion dollars in 1939 -Somewhat socialist -"Nanny State" made everyone dependent upon the gov't PROS -"Safety Net" -Economy didn't collapse -There wasn't a revolution -Made the Depression better than it was II. League of the Lame -America never joins -Many treaties are negotiated but none are enforceable -League has no power or military -League fouled because France and Britain were wimps -A movie came out- "Things to Come" III. Rogue's Gallery - Benito Mussolini- "Il Duce"-ITALY -Fascist Party-Totalitarian Dictatorship - Hirohito- "God-like" Japan o Has pet dictator Jojer-pretty much leader of the country - Hitler- GERMANY o Becomes leader of Nazi party o Starts revolution in 1923 o While in jail he writes "Mein Kampf" ("My Struggle") -His plan for Germany -HIS GOALS FOR GERMANY -Reverse the Depression -Make a military -Get rid of the Jews -Reunite all German-speaking Europeans - In 1933 he becomes dictator of Germany THE WAR TO END WAR- PART 2 I. ...read more.

-McCarthy comes up w/a list of Commies in America -He held a lot of hearings accusing (falsely) many people of being communist -Accuses - the U.S. Army of being full of communists - oversteps his limit - he gets shut down in 70 to question vote by congress -The red scare mellows out, but is not gone -Things that keep the Red Scare alive -The Rosenberg's - give atomic bomb technology to Soviets -Sputnik - first satellite in space II. Truman Presidency -Democrat - FDR Vice President -The Fair Deal -Put in concrete all the things that Roosevelt did w/the new deal -Keeps the parts that are good -1948 - The democratic party splits -1948 election - Three democrats: -Wallace (progressive democrats) -Truman (real democrat) - Thurmond (democrats) -Republicans run Dewey -Everyone thought that Dewey would win due to the democratic split III. Eisenhower Era -"Baby Boom" 45-61.5 million babies born -U.S. became 41% wealthy, 6% population -Europe was destroyed & we weren't (we rebuild Europe & get rich) -The G.I. bill: government program that pays college tuition for veterans -Almost all were white -When white soldiers returned they moved to suburbs -Many new communities are created around the automobile -So much more to buy (T.V.) -There is a shift in political power: southern politicians become presidents (South sunbelt; north sunbelt) - Brown vs. Board of Ed. (1954) -Black girls are not allowed in elementary school-argued by Marshall - Blacks win, separate & not equal ...read more.