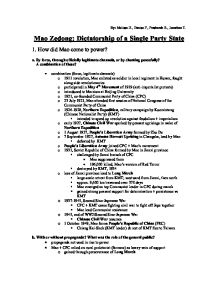 What forces brought about the dictator's goals? Consider the use of military force, propaganda, personal charisma, strong economic policies, foreign polices etc. * desire to establish China as a Socialist power * desire to return China to state of world prestige after period of Western/Japanese imperialism (GLF) * desire to maintain power c. To what extent were the dictator's goals implemented? * achieved Socialism in China * GLF disaster - iron production increased 45% in 1958 and a combined 30% over the next two years, but plummeted in 1961, and did not reach the previous 1958 level until 1964. * HFC persecutions successful in silencing critics * CR successful in purging opposition, esp. Liu Shaoqi d. What were the chief good/bad things that Mao did for his state? Good Bad Illiteracy - 1949, 80% illiteracy rate vs. 1976, <7% illiteracy rate Destroyed centuries worth of history w/ CR Life Expectancy - 1949, 35 years vs. 1976, 70 years Estimated 750,000 - 3 million deaths attributed to CR Ended "Century of Humiliation" from Western & Japanese imperialism Estimated 30 million deaths attributed to GLF Abolished prostitution Massive deforestation of countryside due to GLF HFC began trend of free thought and critical assessment. A similar surge of ideological thought would not be seen until late 1980s, culminating on 5 July 1989, in Tiananmen Square. Invaded Tibet - imperialism! ...read more.