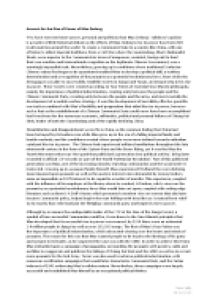 Account for the Rise of Power of Mao Zedong

﻿Account for the Rise of Power of Mao Zedong ?Few have exercised more power, personal and political, than Mao Zedong?. Salisbury?s opinion is a matter of little historical debate as the effects of Mao Zedong?s rise to power have been felt in all countries around the world. To create a Communist State in a country like China, with one of history?s oldest imperial traditions, from a Civil War where the Guomindang, Mao?s Nationalist Rivals, were superior to the Communists in terms of manpower, materiel, foreign aid to fund their war machine and international recognition as the legitimate Chinese Government, was a seemingly impossible task. Nevertheless, growing up in conditions where traditional Confucian Chinese values first began to be questioned enabled Mao to develop a political skill, a ruthless determination and a recognition of the peasants as a potential revolutionary force, from which the demagogue was able to successfully establish Soviets in Jiangxi and Yanan, an integral step in his rise to power. These Soviets were created according to Four Points of essential Sino-Marxist philosophy, namely the importance of political indoctrination, creating unity between the people and the Chinese Communist Party, creating unity between the people and the army, and most crucially the development of a mobile warfare strategy. It was this development of incredibly effective guerrilla war tactics combined with Mao?s flexibility and pragmatism that aided his rise to power, however such a feat as the establishment of a Chinese Communist State could never have been accomplished had it not been for the numerous economic, militaristic, political and personal failures of Chiang Kai Shek, leader of both the Guomindang and of the rapidly declining China. Dissatisfaction and disappointment were rife in China, as the common feeling that China had been betrayed by its leaders rose while Mao grew up in the era of a falling imperial family and hostile warlords, and the conditions created where people were more inclined towards radicalism catalysed his rise to power. ...read more.

Despite being the March ?in many ways an unmitigated disaster?, Mao manipulated what was a retreat from the Jiangxi province after a defeat at the hands of Nationalist forces into what was later seen as a victory with enormous propaganda value for the Communists. The March also marked a change from Comintern-pleasing policy, as Mao, having been previously sidelined by Comintern agents Otto Braun and Zhou Enlai in the running of Jiangxi, began to make decisions post-Long March based solely on the interests of the CCP rather than Russia. Lynch rightfully refers to the Long March as ?a prodigious event? but ?also a defeat?; only one tenth of its undertakers survived the March, and those who did were left physically and mentally exhausted and in bad condition after walking the eight thousand miles to Yanan in little over a year. It also symbolised a moral defeat for Mao, as he left his two year old son behind in Jiangxi and ?another small part of Mao?s humanity withered on the vine? according to Philip Short. Nevertheless, Mao refused to view the March as anything less than the biggest success yet for the CCP, declaring it to have sowed the seeds of revolution and ?[announcing] to some two hundred million people in eleven provinces that the road of the Red Army is their only road to liberation?. As well as symbolising his emergence as leader of the CCP, the Long March also symbolised Mao?s determination and resourcefulness as he created from a defeat a Red Myth which would inspire Communist propaganda for years to come, using a flexibility which would characterise Mao?s rise to power and beyond. Nevertheless, just as important as Mao?s successes in his rise to power were the failings of Chiang Kai Shek and the GMD. The Three Principles of Nationalism, Democracy and People?s Livelihood that the GMD pledged were left unfulfilled, and as the popularity they had gained in the twenties and thirties faded, the Communists? opponents were left aloof from society. ...read more.

Mao was a realist as well as an idealist, and also recognised when it was necessary to work with others to achieve his goals. This took the shape of United Fronts when they were necessary, and working with military leader Zhu De; their partnership was described as ?a potent and ultimately successful force?, and Wilson credits their union as significantly aiding Mao?s rise to power as ?[without it] Mao would have remained at best a discredited provincial leader?. His cooperation with another military leader, Lin Bao, was crucial in the Communists? Civil War victory, as Mao acknowledged Lin?s prowess in the art of guerrilla warfare and, unlike Chiang Kai Shek did with GMD army generals, gave him the power and independence to operate effectively without interfering in minor decisions. Dietrich asserts that ?few modern political figures can equal Mao Zedong?; this was largely due to his ruthlessness pragmatism and adaptability allowing for his eventual rise to power. Despite being ?a hero to some, a demon on to others? according to Cheek, Mao?s unique revolutionary aims and ability to adapt his political ideas to new situations ensured that they both survived and flourished in a China submerged in the failings of its supposedly Nationalist government. It was this flexibility and pragmatism of Mao?s that accounted for his rise to power, yet another vital factor was the contrast he drew to the failings of Chiang Kai Shek by appearing to offer the people an alternative to the repressive measures of the GMD and instead to celebrate the unity between the party, the people and the army found in Jiangxi and Yanan, and extend it to all China. Therefore, despite Chinese Communism lacking in major resemblances to the traditional Marxism it was supposedly based on, it was made successful due to the flexibility and pragmatism that, guiding Mao?s decision making, at last resulted in his successful rise to power. Ciara Lally 04.06.2010 ...read more.