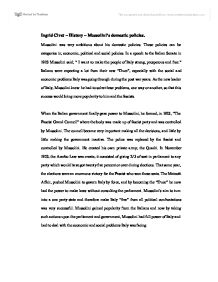 Ingrid Civet - History - Mussolini's domestic policies. Mussolini was very ambitious about his domestic policies. These policies can be categories in; economic, political and social policies. In a speech to the Italian Senate in 1923 Mussolini said; " I want to make the people of Italy strong, prosperous and free." Italians were expecting a lot from their new "Duce", especially with the social and economic problems Italy was going through during the post war years. As the new leader of Italy, Mussolini knew he had to solve these problems, one way or another, so that this success would bring more popularity to him and the fascists. When the Italian government finally gave power to Mussolini, he formed, in 1923, "The Fascist Grand Council" where the body was made up of fascist party and was controlled by Mussolini. The council became very important making all the decisions, and little by little making the government inactive. The police was replaced by the fascist and controlled by Mussolini. ...read more.

The goals of the "Battle of the Marshes", was to increase the land availability for cereal production, as well as, improving health conditions by reducing malaria. Economically, this battle provided more jobs and did improve health conditions however the raise in farming production was neglected. At the same time, this battle brought more confrontation between the divided Italy because most new land reclaimed was in the North, which made the Southern people very unhappy but could not show this through strikes as it was forbidden to do so. Mussolini failed to bring stability between the North and the South. People from the North were considered rich and literate whereas people from the South were the opposite. The "Battle for the Lira" was the revaluation of the Lira at a higher rate to reduce inflation and prove to Italians, and the world, that the Lira, therefore Italy, was getting "stronger". Nonetheless, this action hurt the economy by making Italians goods overpriced and by lowering wages. ...read more.

The Church and the Fascist had fundamental differences, but because the Church was a powerful part of Italy, Mussolini tried to improve their relations. Once again Mussolini did this to gain more popularity from the society. In 1929, the Concordat and the Lateran treaties were signed and therefore Catholicism became Italy's religion, and Mussolini gained veto on church appointments and the support from the Church. "The Concordat has been described as Mussolini's greatest Fascist achievement" and made Italy a little more "strong and prosperous". Mussolini's policies brought in revolutionary ideas into society and did contribute to his rise of popularity as the "Duce" of Italy, despite the fact that many of his policies were surrealistic and unable to transform the Italian society. His main success was his alliance with the church. Italian's economy did go through a phase of success but his fascist ideology made the economic problems come back, as for the political success, Mussolini achieved his main goal by making Italy be a one state party, the Fascists and took over Italy. Nevertheless, his aims "to make the people of Italy strong, prosperous and free" were very minimal because he was more interested in personal power. ...read more.