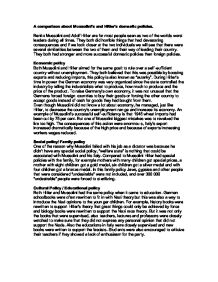 A comparison about Mussolinis and Hitlers domestic policies.

A comparison about Mussolini's and Hitler's domestic policies. Benito Mussolini and Adolf Hitler are for most people seen as two of the worlds worst leaders during all times. They both did horrible things that had devastating consequences and if we look closer at the two individuals we will see that there were several similarities between the two of them and their way of leading their country. They both had stronger and more successful domestic policies then foreign policies. Economic policy Both Mussolini and Hitler aimed for the same goal: to rule over a self-sufficient country without unemployment. They both believed that this was possible by boosting exports and reducing imports, this policy is also known as "autarky". During Hitler's time in power the German economy was very organized since the state controlled the industry by telling the industrialists what to produce, how much to produce and the price of the product. ...read more.

For example, history books were rewritten to support Hitler's theory that great things could only be achieved by force and biology books were rewritten to support the Nazi race theory. But it was not only the books that were supervised, also teachers, lectures and professors were closely watched to make sure that they did not express any personal opinion that did not support the Nazis. Also the educations in Italy were closely supervised and new books were written to support the fascists. Students were also encouraged to criticize their teachers if they showed a lack of enthusiasm for the party. Italian children were forced to join the government's youth organizations, where they were convinced that everything was seen in terms of struggling. "Believe, Obey, Fight!" was something that the children were told, which meant that they should show total obedience to the authorities. At the age of 14 all boys in Germany had to join the "Hitler youth" and all girls the "League of German Maidens". ...read more.

But in Italy Mussolini signed a agreement with the Roman Catholic Church since it was a powerful institution. The agreement covered that the church governed the spiritual side and Mussolini governed the political side of Italy. Treatment of minorities This is where Mussolini and Hitler's views on how to rule a country differed greatly. Hitler's considered that Jews and other "undesirable" such as gypsies, homosexual and retarded people didn't deserve to live and sent them to different concentration camps where most of them sooner or later would die. Nothing was as big as Hitler's hate to the Jewish people and 1938 he authorized what became known as the "Kristallnacht"( the "Night of Broken Glass"). The Kristallnacht was the night when Nazis attacked and burned down synagogues and other Jewish properties throughout the whole Germany. At the end of the World War Two it became clear that Hitler almost managed with his mission to exterminate all the Jews; out of total 9 million Jews living in Europe before the war, were 5.7 million of them murdered during the war. ...read more.