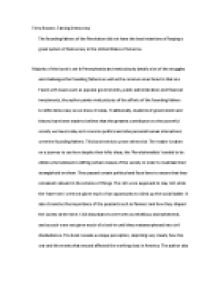 ﻿Terry Bouton, Taming Democracy The founding fathers of the Revolution did not have the best intentions of forging a great system of Democracy in the United States of America. Majority of the book is set in Pennsylvania and meticulously details a lot of the struggles and challenges the founding fathers as well as the common man faced in that era. Faced with issues such as popular governments, public administration and financial investments, the author paints vivid pictures of the efforts of the founding fathers to stifle democracy as we know it today. Traditionally, students of government and history have been made to believe that the greatest contributors to the powerful society we have today as it concerns politics and interpersonal human interactions were the founding fathers. This book tends to prove otherwise. The reader is taken on a journey to see how despite their lofty ideas, the ?Revolutionalists? tended to be elitists who believed in stifling certain classes of the society in order to maintain their stranglehold on them. ...read more.

It also portrays real characters from the Revolution such as Benjamin Franklin and George Washington, as genuinely imperfect people, only interested in what they were personally entitled to. The tone of the novel is largely factual and unbiased. It lets the reader make up his mind based on the evidence provided by Bouton from the events that occurred during that era. In certain chapters it points out the advantages and disadvantages of both sides of the spectrum regarding monetary policies and systems of public administration. It?s structured to give the reader something to look forward to in the next chapter and gets their uninterrupted attention. Bouton also tries to illustrate how the monetary policy adopted by the elite and Robert Morris almost cost the Army the war during the Revolutionary period. This was illustrated in Diary, Feb. 18, 1782, Morris Papers vol. 4, 249; Morris to Edward Carrington?. ...read more.

to the fact that the middle and lower class of the society were desperate for a popular government dictated by the wishes of the majority. I agree with the author?s analogy that it was a case of the community vs the ruling class so the evidence used was valid in this case. I like the book because it goes really in-depth at explaining issues that still matter to contemporary America today which shows us the genesis of those issues and how far we have come in solving certain problems. It also seems to discredit the notion we have that the founding fathers were perfect and made decisions that all benefited the society. They were great men with lofty ideas, but they were not infallible. They made mistakes just like present day politicians do and that shows that our society will forever evolve. This makes it inevitable that the middle class must always look out for its best interest in whatever way it can legally and constitutionally. ...read more.