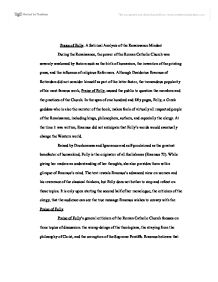 Analysis of Erasmus's Work: The Praise of Folly

Praise of Folly: A Satirical Analysis of the Renaissance Mindset During the Renaissance, the power of the Roman Catholic Church was severely weakened by factors such as the birth of humanism, the invention of the printing press, and the influence of religious Reformers. Although Desiderius Erasmus of Rotterdam did not consider himself as part of the latter factor, the tremendous popularity of his most famous work, Praise of Folly, caused the public to question the members and the practices of the Church. In the span of one hundred and fifty pages, Folly, a Greek goddess who is also the narrator of the book, makes fools of virtually all respected people of the Renaissance, including kings, philosophers, authors, and especially the clergy. At the time it was written, Erasmus did not anticipate that Folly's words would eventually change the Western world. Raised by Drunkenness and Ignorance and self-proclaimed as the greatest benefactor of humankind, Folly is the originator of all foolishness (Erasmus 72). ...read more.

He feels that Christians should simply be concerned with making the life of Christ their example, and that the separation of Christians caused the focus to be shifted off of Christ and onto petty matters. Erasmus asserts the notion that most monks were forever self-glorifying, and their thirst for power was a shadow cast over many aspects of their lives. Nearing the close of the book, Erasmus delivers yet another heavy blow with his analysis of the Church's authority. He accuses the Supreme Pontiff of being power hungry and greedy, for "if...they [meant to] take the place of apostles who were poor men...they should either renounce their ambitions for the office they [held] and resign without further regrets" (178). In comparison to the life of purity and piety they should be living, the Church had "wealth and honours...sovereignty and triumphs...taxes and indulgences" (179), all of which would ideally be replaced with the reading of Scriptures, with prayers, and with sermons. ...read more.

For instance, Erasmus uses satire to end the book optimistically, even after he berates the clergy. He calls Christians the biggest fools of all for "they ignore insults... make no distinction between friends and enemies... sustain themselves on vigils, toil, humiliations" (201), and all the while they direct all of their endeavours toward God. Using this paradoxical twist, Erasmus praises true Christians as generous, good, and strong-willed in their faith. The myriad of ideas in Praise of Folly work together to convey the mindset of the Renaissance. One of the most noticeable things about the book is its constant references to the great thinkers of the ancient world. This is a very distinguishable characteristic of the Renaissance, humanism, which encouraged development of education and culture through the learning and application of Classical models. Even Erasmus feels that "rhetoricians of [the] day...fancy themselves practically gods on earth if they can ... work together a few Greek works into their Latin speeches, however out of place [they] are" (69). ...read more.