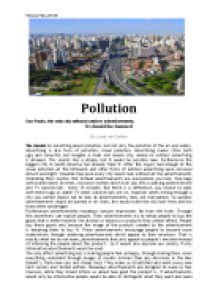 ﻿VISUAL POLLUTION Pollution Sao Paulo, the only city without outdoor advertisements. It should be banned By Joost van Geffen We should do something about pollution, but not only the pollution of the air and water. Advertising is also form of pollution, visual pollution. Advertising makes cities both ugly and colourful, but imagine a clean and serene city, where no outdoor advertising is allowed. This sounds like a utopia, but it would be possible now. Furthermore the biggest city in South America has already tried it. After the mayor had enough of the visual pollution all the billboards and other forms of outdoor advertising were removed almost overnight. Visualize how pure every city would look without all the advertisements disturbing their skyline. But instead advertisements are everywhere you look, free bags with brand names on them, exclusive clothes which turn you into a walking advertisement and TV commercials every 15 minutes. But there is a difference, you choose to walk with these bags or watch TV when commercials are on. ...read more.

So smaller companies would stand equal chances and will have to stand out with aspects like quality and service to get their name out. These measures stimulate companies to invest money to improve their products. Spending money on advertisements can also have negative effects on companies, when their advertising is unsuccessful and does not lead to higher revenue of sales, it will not cover the advertising cost. That can lead to higher prices. So it could not be disadvantageous if the amount of advertisements outside would minimize. Some people claim it would be bad for the economy or that everybody who is working in the advertising market will lose their job. But in the city of Sao Paulo it proved to work out different. Companies invested money to find new and creative ways of advertising inside and the citizens turned out to spend as much money as before on new products. And seventy percent of the citizens claim to find the ban beneficial. ...read more.

Because through a magazine article it is easy to convince a big audience of your meaning. I tried to make it look as much as possible as an article from Newsweek. I mainly focused on the layout of the Newsweek, and less on mimicking the style of writing of the articles in Newsweek. The audience of Newsweek is middle or higher class people, I tried to use educated language. Thus I used words like: negligent, emanates, covet and redundant. The topic of my written task is linked to the culture part of the IB as it focuses on how advertising is part of our culture, but should not be as it has only negative consequences. Through the title I tried to make it look like this is just another article about environmental pollution, which of course cannot be banned. But if the audience would read the first few lines they will discover the topic of the article and therefore pay more attention to the article. Word count: 220 Joost van Geffen ...read more.