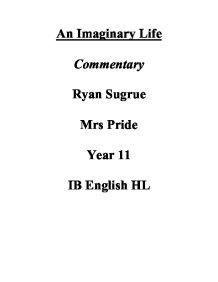 An Imaginary Life Commentary Ryan Sugrue Mrs Pride Year 11 IB English HL This passage from An Imaginary Life by David Malouf focuses on the returning of The Child to his 'normal' environment. It is in this prose that one of the prevalent themes is explored - the interrelationship between Man and his environment and the impact changes in the environment have on one's personality. The effects of setting and physical surroundings are largely depicted and consequently issues such as education, isolation and the irony of the metamorphoses are highlighted. This is due to the description diction and imagery seen throughout the passage, helping portray Ovid's adaptation to his new environment and the relationship he has with The Child. This final passage of novel portrays the end result of Ovid's metamorphoses. Initially he describes the environment as bleak and has an extremely pessimistic to his surroundings. However as he learns more about speech and culture of Tomis he learns the true meaning of transformation - learning life through invaluable lessons and interactions with the environment. And this is what is so evident in this prose. He comes to understand that you cannot change someone to suit your needs, in this instance it is The Child. He completes his learning cycles, becoming part of the boy's world. He does this by rejecting the society of Tomis and living in a state completely dependent on the environment. ...read more.

He has had a physically and metal journey. He refers back to Rome, "Its strange to look back on the enormous landscape ... across my life in Rome", and the his "childhood". Portraying the Ovid has finally accepted his punishment for "the footprints lead to this place and not other" and that The Child does not belong in a human civilization but rather his own civilization with nature. It is this metaphor that leads onto his reflection of his childhood. This must be examined for it shows that despite how far he has come, he still thinks of his youth - its shows the idea of imagination t again through his dreams and thoughts. This allusion of his childhood on his farm concludes with the paradoxical statement, "It is spring. It is summer. I am three years old. I am sixty". The short stagmatic sentences of "it is spring ... I am three years old" refers t his dream, whereas "It is summer ... I am sixty" refers to the present tense. Thus illustrating that despite his mental journey he is still in two minds, but everyday is finding it easier to identify with the culture - a completely different culture to Rome. To further express the idea that The Child is finally back within his natural environment is the short sentence, "The Child is there". ...read more.

Moreover, it shows the development of Ovid, "I am three years old. I am sixty. I am six". By this stark contrast between the age barriers it highlights the physical, and mental journey that Ovid has come one. For now he feels "I am there". He feels that he has finally reached the place of where he is meant to be, "the point on the earth's surface where I disappear" - it's the place where he could never find in all his wanderings, in all his dreams. There was no place like this in his imagination. The true feelings of Ovid are finally expressed in these final three words. This short sentence is intended to illustrate the eventual utopia of belonging and achievement. Thus, this final section of Malouf's An Imaginary Life examined the end result for not only the change in The Child, but also the metamorphoses Ovid has undergone. It illustrates the poet's new outlook on life and the natural environment through the descriptive imagery. Also illustrating the natural animalistic instincts The Child has through the diction and verbs. Hence, expressing that Ovid has ironically completed his learning, for he wanted to transform the wild boy. A key theme - the interrelationship man and his environment - this is depicted through Ovid's new reliance, not only human civilization but rather nature. Ovid has completed a journey of self0disrovery, leaning how to establish an existence based on the natural world, entering a partly unrealistic and imaginary way of life. ...read more.