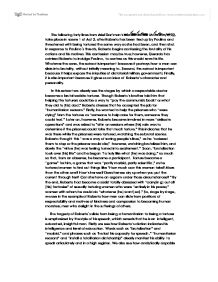 The following forty lines from Ariel Dorfman's Death and the Maiden (1990), take place in scene 1 of Act 3, after Roberto has been tied up by Paulina and threatened with being tortured the same way as she had been, and then shot. In response to Paulina�s threats, Roberto begins confessing the brutality of his actions and his motives. This confession may be true; however, Gerardo has advised Roberto to indulge Paulina, to confess as this would save his life. Whatever the case, the extract is important because it portrays how a man can slide into brutality, without initially meaning to. Second, the extract is important because it helps expose the iniquities of dictatorial military governments. Finally, it is also important because it gives us an idea of Roberto's character and personality. In this extract we clearly see the stages by which a respectable doctor became a brutal sadistic torturer. Though Roberto's brother told him that helping the torturers could be a way to "pay the communists back for what they did to [his] dad," Roberto stresses that he accepted the job for "humanitarian reasons." ...read more.

The tragedy of Roberto�s slide from being a humanitarian to being a torturer is emphasized by the style of his speech, which reveals that he is an intelligent, educated, insightful man. Firstly we see how Roberto's diction indicates his intelligence and level of education. Words such as "brutalization" and "morbid," and phrases such as "he lost his capacity for speech," "humanitarian reasons" and "install a totalitarian dictatorship" clearly manifest his ability to speak articulately and in a high register. We also see how analytically capable Roberto is, as he does not just describe his own actions but explains why they occurred, carefully dissecting his his motives for working with the torturers, not to "pay the communists back" but "for humanitarian reasons." He can organize his account in clear, logical stages, with phrases like "It was slowly, almost without realizing how," "At first," "But afterwards," "By the time," "I began to," and "It became." Additionally, even in the circumstances in which he is giving this confession, in fear of his life, Roberto uses figurative language, suggesting that he has good rhetorical abilities. ...read more.

Finally, the fact that, throughout his speech, Roberto refers to the government only as "they" evokes the way in which such governments work in the shadows, secretly and anonymously, to torture and terrorize. Thus this extract does not only show how Roberto and men like him deteriorate when they become involved in torture; it also shows how dictatorial regimes can manipulate such men, facilitating and enabling this deterioration to occur. In conclusion, this extract is very important as, whether Roberto�s confession is true or feigned, it reveals how even the best of men may slide into such brutality and how military governments can create vile monsters out of exemplary human beings. Through the details of Roberto�s confession, Dorfman is inviting his audience to consider how a man becomes sub-human. If a respectable doctor, a benefactor to the community, could turn into such a monster because of the effects of such a regime, then what would happen to the rest of society? Dorfman tries to make the reader consider that this incident that has turned Roberto's life into a monster might happen to anybody in our society; especially in a switch of regime. ...read more.