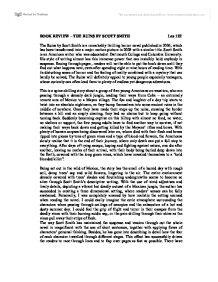 BOOK REVIEW - THE RUINS BY SCOTT SMITH Lan 12E The Ruins by Scott Smith is a remarkably thrilling horror novel published in 2006, which has been transformed into a major motion picture in 2008 with a similar title. Scott Smith is an American writer who was educated at Dartmouth College and Columbia University. His style of writing almost has this immense power that can invisibly hold anybody in suspense. Racing through pages , readers will not be able to put the book down until they find out what happens next, even after spending eight or nine hours of reading time. With its disturbing sense of horror and the feeling of reality combined with a mystery that can hardly be solved, The Ruins will definitely appeal to young people especially teenagers, whose curiosity can often lead them to plenty of endless yet dangerous adventures. This is a spine-chilling story about a group of five young Americans on vacation, who are passing through a densely dark jungle, leading their ways from Coba - an extremely remote area of Mexico to a Mayan village. ...read more.

After days of trying escape, hoping and fighting against nature, one die after another, leaving no marks of their arrival, with their body being buried deep down into the Earth, covered with the long green vines, which have revealed themselves to a "cold blooded killer". Being set out in the wild of Mexico, the story has the smell of a humid day with rough soil, damp trees' sap and wild flowers, lingering in the air. The entire environment densely covered with trees' shades and flourishing undergrowths seems to become so alive through Scott Smith's descriptive writing. With the use of vivid adjectives and lively details, depicting a vibrant but deadly outcast of a Mexican jungle, the author has succeeded in creating a three dimensional setting, where readers' senses can be fully awakened. Personally, I was completely amazed by how realistic the setting seemed when reading the novel. I could easily imagine the eerie atmosphere surrounding the characters when passing through ceilings of canopies and the exhaustion of a hot and dusty summer day. ...read more.

Finally, as strange as it might sound, it is the frustration caused by the immaturity and impatience of the characters, which indeed, keeps me interested until the very end of the novel. By including different personal thoughts of different characters along the story lines, the author has portrayed very realistically how stupidly people at the very early stage of their lives, without much experience and self-control, would react under such circumstances. For example, how the two female characters kept panicking and blaming themselves as well as others for their current situation or how the group leader, so impatiently and blindly, led everyone into a path that had been covered and hidden on purpose at the beginning. In the end, it is a very valuable lesson about patience, care and teamwork which has been embraced by Scott Smith. With the great fear that will long haunt its readers, The Ruins should be considered to be not only one of the first top ten books but also one of the best horror novels of the century, which has made its way through many other great publications to be one of the National Bestsellers of the United States. ...read more.