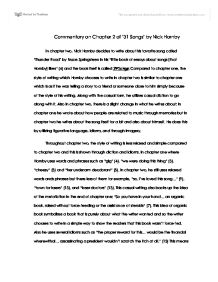 Commentary on Chapter 2 of 31 Songs by Nick Hornby

Commentary on Chapter 2 of '31 Songs' by Nick Hornby In chapter two, Nick Hornby decides to write about his favorite song called 'Thunder Road' by Bruce Springsteen in his "little book of essays about songs [that Hornby] likes" (4) and the book itself is called 31 Songs. Compared to chapter one, the style of writing which Hornby chooses to write in chapter two is similar to chapter one which is as if he was telling a story to a friend or someone close to him simply because of the style of his writing. Along with the casual form, he utilizes casual diction to go along with it. Also in chapter two, there is a slight change in what he writes about; in chapter one he wrote about how people are related to music through memories but in chapter two he writes about the song itself for a bit and also about himself. He does this by utilizing figurative language, idioms, and through imagery. Throughout chapter two, the style of writing is less relaxed and simple compared to chapter two and this is shown through diction and idioms. ...read more.

The use of rhetorical question can be found a couple of time in chapter two of Nick Hornby's 31 Songs. In the opening paragraph of chapter two, it says, "So I've loved this song for a quarter of a century now, and I've heard it more than anything else, with the possible exception of... who am I kidding? There are no other contenders." (9) This rhetorical question is used to exaggerate the fact that according to Nick Hornby there aren't any songs that can be better than 'Thunder Road' by Bruce Springsteen. The second use of rhetorical question is when Hornby is talking about how Springsteen's songs became famous. "... he has won, simply by virtue of playing the night after night after night, to an ever-increasing crowd of people?" (12) This rhetorical question is used to simply prove that Springsteen is becoming famous due to the "ever-increasing crowd or people" (12). The last but not least rhetorical question is also related to Springsteen and his career. "'Cos, the record company, Rosie, just gave me a big advance', other than that the record company has just given him a big advance?" ...read more.

It gives the reader a sense of being 'fed up' because it seems that he has said those lines many times and he is tired of saying it over and over again so he rushes the sentence. This essay written by Nick Hornby which is about the song called 'Thunder Road' by Bruce Springsteen doesn't require the reader to know or even like the song in other to appreciate his work. This is because his work is very self explanatory and the reader can get his feeling towards the song by reading what he wrote about it and in fact maybe some readers can like the song without even hearing the song and just by reading the essay. With this said, some may think that Hornby is very successful overcoming the problems of "Dancing about architecture". If he is able to make someone like the song by telling the reader, the song's story and how the music sounds like and without the reader even hearing the song then, he has certainly gone past the problems of "dancing about architecture". But if he wasn't able to do so, than he still has overcome the problems of "dancing about architecture" simply because he has explained the song very well to the reader by relating it to real life examples. ?? ?? ?? ?? ...read more.