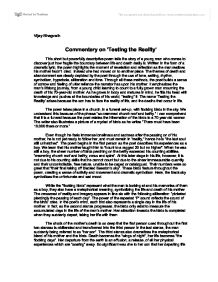 Vijay Bhagvath Commentary on 'Testing the Reality' This short but powerfully descriptive poem tells the story of a young man who comes to discover just how fragile the boundary between life and death really is. Written in the form of a dramatic lyric, the poem highlights the moment of revelation and reflection as the man realizes his mother hadn't died; instead she had moved on to another place. The themes of death and abandonment are clearly depicted by the poet through the use of tone, setting, rhythm, symbolism, hyperbole, alliteration and time. Through all these methods, the poet builds a sense of sorrow and feeling of utter reliance the narrator has upon his mother. It emphasizes the man's lifelong journey, from a young child learning to count to a fully grown man mourning the death of his 70-year-old mother. As he grows in body and matures in mind, he fills his head with knowledge and pushes at the boundaries of his world, "testing" it. The name 'Testing the Reality' arises because the son has to face the reality of life, and the deaths that occur in life. ...read more.

At this later stage in his life, however, it is not due to his counting skills that he cannot count but due to the sheer immeasurable quantity and their uncontrollable, free nature, unable to be caged or catalogued. Their numbers were so great that "their final taking off blacked Beeston's sky". These birds feature throughout the poem, creating a sense of activity and movement and dramatic symbolism. Here, the black sky symbolises the unfortunate and sad mood. While the "flocking birds" represent what the man is looking at and his memories of them as a boy, they also have a metaphorical meaning, symbolizing the life and death of his mother. The crossroad of reality and imagery appears in line six with the following alliteration: "picketed piercingly the passing of each day". The power of the repeated 'P' sound reflects the sound of the birds' cries. In the poet's mind, each bird also represents a single day in the life of his mother. In fact, as the second stanza progresses, the birds only exist to measure the accumulated days in the life of the man's mother. ...read more.

However, after his mother dies, and they leave too, he comes to see them in a different light, after they "soared away." His opinion of them has now changed and he sees them as graceful and elegant creatures. This imagery also successfully implies life after death, and the setting of the poem becomes important when looked at in this light. A church is a place of peaceful meditation, praying and holiness, a place where the boundaries between the physical and the spiritual, the barriers between life and death, merge. For these reasons it becomes the nest that hatches souls into the heavens. Even though the birds, and the man's mother with them, fly "beyond all sight, hearing, taste, smell, touch" they do not fly beyond love or memories, instead leaving a path for the man to follow when it is his turn to be "hatched". The lesson the mother taught her son began with counting, but ended with a realization of life after death and the possibility of living, in spirit, for infinity. Words - 921 ...read more.