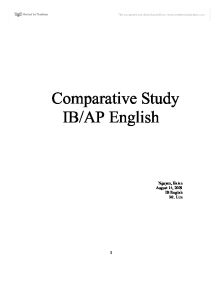 Comparative Study IB/AP English Nguyen, Haian August 14, 2009 IB English Mr. Lim Word Count: 1129 Have you ever been threatened by societal influences that dictate the way you lead your life? Portrayal of society insensibly places an important role in our lives because we often allow ourselves to be governed by the general public's perspectives and criticism. How we see ourselves is not nearly as important as how we are seen in the eyes of the beholder. For example, teenagers habitually parade their new electronics such as a phone or a MP3 player because those material things are what appear to define themselves in the eyes of other. Thus we periodically seek the help of an outsider to identify ourselves. However, these influences could positively boost your ego or turn you into a victim of society. As Laura Esquivel keenly points out in Like Water for Chocolate and Gabriel M�rquez's Chronicle of a Death Foretold, the protagonists in both novels are turned into victims of society due to an array of societal influences. ...read more.

As the story descends, an additional significance is manifested. Readers can see the shared degree of guilt that both novels present. In Like Water for Chocolate, guilt arises from many angles. One of which presented by Esquivel is the cruelty that Mama Elena, the antagonist, places upon her daughter, Tita. Since the day Tita was born, her life was confined in the kitchen where she utilizes her cooking talents to fulfill the needs of others and sometimes seek contemplation within herself. After her marriage with Pedro is denied, she was asked to prepare her sister's wedding with Pedro. Tita gets beaten every time she attempts to speak her mind due to the level of obedience that Mama Elena has established in the De la Garza family. As the head of the family, Mama Elena dictates the way Tita's life should be. Although the idea is not revealed in the novel, one can sense the guilt that Mama Elena should have felt. All the troubles she has caused Tita soon turned into an act of victimization and Tita, once again is a victim. ...read more.

How society is portrayed has a big impact on one's personal identity. If one is not strong enough, one will be victimized by portrayal of society because human beings strive to be perfect in the eyes of others yet not our own. As we have seen the manifestation of guilt, honor and family duty and their significance in our lives presented by Marquez and Esquivel, we can see how portrayal of society plays a big part when it comes to identifying ourselves. Tita was victimized because she allowed her mother to dictate her life. Moreover, she could not marry the person she loves all due to the family tradition that Mama Elena established. In the corresponding novel, Santiago Nasar is also victimized by a lie that caused him to be murdered. Although it was an act of cruelty, it was needed for the Vicario to obtain their code of honor and blend in with the Utopian ideal of society. It is not easy to control our destiny but it is possible. Be strong to yourselves and you will not be a victimized by portrayal of society. ?? ?? ?? ?? 1 ...read more.