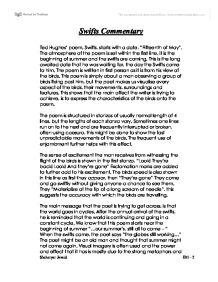 Swifts Commentary Ted Hughes' poem, Swifts, starts with a date, "Fifteenth of May". The atmosphere of the poem is set within the first line, it is the beginning of summer and the swifts are coming. This is the long awaited date that he was waiting for, the day the Swifts come to him. The poem is written in first person as it is from his view of the birds. This poem is simply about a man observing a group of birds flying past him, but the poet makes us visualise every aspect of the birds, their movements, surroundings and features. This shows that the main affect the writer is trying to achieve, is to express the characteristics of the birds onto the poem. The poem is structured in stanzas of usually normal length of 4 lines, but the lengths of each stanza vary. Sometimes one lines run on to the next and are frequently interrupted or broken, often using caesura, this might be done to show the fast unpredictable movements of the birds. ...read more.

The poet might be an old man and thought that summer might not come again. Visual imagery is often used and the power and effect that it has is mostly due to the strong metaphors and similes. Like when the bird was "screaming as if speed-burned". This suggests that the speed of the birds was so great that it was too much to handle for it. Overall the tone is sudden and of excitement. This is due to the odd structure, the sudden breaks at times in the poem and due to the continuation of lines in the poem which suggests the birds are moving quickly. There are also many short lines which increase the pace of the poem. When we read the poem, all of these effects add up to create this fast paced poem. "Every year a first- fling", "Misfit flopped". Every year there is one young bird unable to fly, it consistently tries and tries again every time to get back on "his tiny useless feet", but it fails. ...read more.

The way in which the birds "Power-thrust" shows us that the birds fly with immense strength. An image of fear is developed when the birds are "Erupting" and the "Schrapnel-scatter terror" of the birds adds to this effect. However then at times, the poet describes these birds as soft and fragile creatures, after they power-thrust, they "flicker" and are also "gentle". This contradictory example shows the contrast between their speed which at times looks to be uncontrollable like a "lunatic limber scramming frenzy". The poet teaches us to not interfere with the powerful forces of nature, through showing us his attempts to save the birds that are always in vain. The writer captured the image of the bird and conveyed it to the reader as clearly as possible. The image of a very quick and erratic group of birds flying in a certain direction with pin-point accuracy is given to the reader. We know that they are powerful, fearful creatures which can be delicate at times. ?? ?? ?? ?? Sheheryar Javaid IB1 - 2 ...read more.