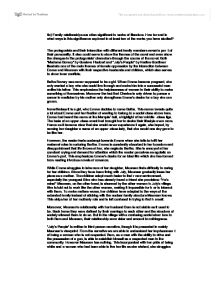 5c) Family relationships are often significant in works of literature. How far and in what ways is this significance explored in at least two of the works you have studied? The protagonists and their interaction with different family members reveal a part of their personality. It also could serve to show the themes of the novel and even show the changes in the protagonists' characters through the course of the novel. Both "Madame Bovary" by Gustave Flaubert and "July's People" by Nadine Gordimer illustrate one of the main themes of female oppression by the interaction between Emma and Maureen with their respective husbands and children, which also serves to show inner conflicts. Bethe Bovary was never supposed to be a girl. When Emma became pregnant, she only wanted a boy who she could live through and make him into a successful man unlike his father. This emphasizes the helplessness of women in their ability to make something of themselves. Moreover the fact that Charles is only driven to pursue a career in medicine by his mother only strengthens Emma's desire for a boy she can groom. ...read more.

While Emma struggles to take care of her daughter, Maureen finds difficulty in caring for her children. Since they have been living with July, Maureen gradually loses her place as a mother. The children adapt much faster to their new environment, especially the youngest Gina who has already found a friend she proclaims: "He's mine!" Maureen, on the other hand, is shunned by the other women in July's village. She is told not to work like the other women, making it impossible for her to interact with them. To make matters worse, her children have adapted to the ways of the extended family instead of sticking with the nuclear family structure Maureen knows. This strips her of her motherly role and is left confused in trying to find herself. Moreover, Maureen's relationship with her husband Bam is not stable as it used to be. Back home they were defined by their marriage to each other and the structure of society allowed them to do so. ...read more.

She does this to follow her dreams and materialistic desires, none of which Charles can provide for her. Charles never suspects any deception and trusts her completely even giving her his power of attorney to fuel her shopping addiction. This continuous deception reveals Emma's dissatisfaction with her life and marriage which she tries to escape. However there are times when Emma tries to repent and become a faithful housewife to Charles, even trying to become religious. This shows the internal conflict on going within herself of being moral or immoral. Nevertheless, she becomes extremely unhappy living as such driving her to pursue her old lifestyle of adultery and deception once more. The two protagonists' journey throughout the novels is hardened by the fact that they are both women and are not accepted by society as they are. They both face internal conflicts on how they should behave. Emma, in the end, commits suicide as she can no longer face the responsibilities of the debt she has created while Maureen crosses the river towards the helicopter, which symbolizes her rebirth of an independent woman no longer bound to her family. ...read more.