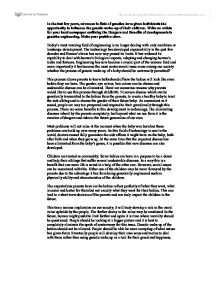 In the last few years, advances in field of genetics have given individuals the opportunity to influence the genetic make-up of their children. Write an article for your local newspaper outlining the Dangers and Benefits of developments in genetics engineering. Make your position clear. Today's most amazing field of engineering is no longer dealing with only machines or landscape development. The technology has developed exponentially in the past few decades and Human's brain has now way passed its limits. It has widened its capability to deal with human's biological aspects, adapting and changing human's looks and features. Engineering has now become a crucial part of the science field and more importantly it has become the most controversial issue arose among our society whether the process of genetic make up of a baby should be universally permitted? ...read more.

There are some benefits to this development in technology, like eliminating diseases inherit by the parents completely, but beyond what we see from it is the creation of dangers and risks to the future generation of our own. Most problems will not arise at the moment when the baby was born but these problems can build up over many years. As this field of technology is new to the world, doctors cannot fully guarantee the side effects it might have on the baby, both after birth and when they grow up. At the same time that the expected disease has been eliminated from the baby's genes, it is possible that new diseases can also developed. ...read more.

This can lead to a short-term decision of the parents and can truly impact the children in the future. This has a serious implication on our society, it will truly develop a role in the moral value upholds by the people. The further decay in the value may be condoned. In the future, human might push the limit further and again it is time where morality should be questioned. People should be looking at a bigger picture and it is best to completely eliminate the spark of controversy for this issue. Genetic make up of the babies should not be allowed. People should be able be more accepting of what nature has given them. Eventually people will develop their own ways and tactics to deal with them rather than using genetic make up as a tool for their greed and happiness. ...read more.