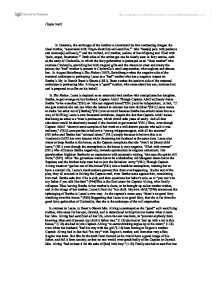 In literature, the archetype of the mother is constituted by two contrasting images: the ideal mother, "associated with Virgin-identified self-sacrifice,"1 who "bear[s] pain with patience and nurture[s] selflessly,"1 and the wicked, evil mother, jealous of her offspring and filled with "pain, anger, frustration."1 Both sides of the archetype can be clearly seen in fairy stories, such as the story of Cinderella, in which the fairy godmother is portrayed as an "ideal mother" who nurtures Cinderella, providing her with magical gifts and the chance to meet and marry the prince; the "bad" mother is present in Cinderella�s cruel step-mother, who neglects and abuses her. In August Strindberg's The Father (1887), Strindberg evokes the negative side of the maternal archetype in portraying Laura as a "bad" mother who has a negative impact on Bertha�s life; in Henrik Ibsen's Ghosts (1881), Ibsen evokes the positive side of the maternal archetype in portraying Mrs. Alving as a "good" mother, who cares about her son, nurtures him and is prepared to suffer on his behalf. In The Father, Laura is depicted as an extremely bad mother who manipulates her daughter, Bertha, to get revenge on her husband, Captain Adolf. Though Captain Adolf selflessly wants Bertha "to be a teacher,"(581) so "she can support herself"(581) and be independent, in fact, "if she gets married she can use what she learned to educate her own children."(581) ...read more.

Mrs. Alving "had to bear it for the sake of [her] little boy." (118) Finally she had to sacrifice her son, for his own good, and "that was the time Oswald was sent away." (118) Oswald blames her for sending him away, and mentions that it "shouldn't have" "made much difference to [her] if [he] was around or not." (136)However, she doesn't care for this blame, since she knows she did the right thing by sending him away, if not he would be "poisoned simply by breathing the foul air" (118) of the house. Especially after she had learned that his father has an affair with Regine's mother, "[her] own servant girl."(118) Finally being made aware of all this, even Pastor Manders describes Mrs. Alving's suffering for her son as an "ordeal." Mrs. Alving openly states how devoted she is to her son, crying out, "Oh Oswald, my own boy! The thing I have in all the world. The one thing I care anything at all about." Moreover, she also proves this to be true as even when Oswald tells his mother how sick he is, she assures him he will "have his mother to look after him." In the end, we see how much she is ready to sacrifice for her son, she is willing to even kill him at his own request, to stop his suffering, "if it becomes necessary" (162) ...read more.

of money to "keep her mouth shut;"(122) the money is intended as a dowry, to induce some man to marry her. She marries Jacob Engstrand so the child will have a father, even though Engstrand only marries her for the money after Regine had "dropped a few hints about how much money she had, and told him a tale about some foreigner."(122) She remains in the marriage for the sake of her child even though Engstrand almost "drove her to death the way [he] tormented her," (93) and, in fact, Regine�s mother does die, though we do not know from what. Thus Ibsen, in Regine�s mother, presents another image of a self-sacrificing mother, paralleling the central image of Mrs. Alving. In Ghosts, Ibsen portrays mothers as heroines who sacrifice their lives for their offspring; in The Father, Strindberg portrays mothers as evil creatures who manipulate and destroy their children�s lives. Ibsen portrays mothers in this way as he wants to stand up for women's rights, and stop the oppression of women in the patriarchal society of 19th century Norway. Strindberg, who was responding to Ibsen's advocation of women�s rights, wants to prove that giving women rights is dangerous, because once women gain power they will use it destructively, as Laura does. 1 1 New dictionary of ideas, volume 4, article on motherhood and maternity by Maina Chawla Singh, p1508 "Stereotypes of 'ideal' mothers" ?? ?? ?? ?? [Type text] ...read more.