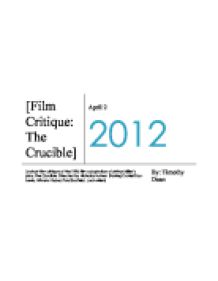 Film Critique of the 1996 film adaptation of The Crucible

[Film Critique: The Crucible] April 2 2012 [A short film critique of the 1996 film adaptation of Arthur Miller's play, The Crucible. Directed by Nicholas Hytner. Starring Daniel Day-Lewis, Winona Ryder, Paul Scofield, Joan Allen] By: Timothy Doan Title: The Crucible Year: 1996 Runtime: 124 minutes Genre/Sub/Mix: Historical Drama Era: 17th Century Grade Category: Mainstream Cast: Daniel Day-Lewis, Winona Ryder, Paul Scofield, Joan Allen Director: Nicholas Hytner Plot: In the 17th century, the town of Salem, Massachusetts is plagued with talk of witchcraft and Satanism after a group of young girls was caught dancing around a fire in the middle of the woods. Soon after, with two girls in a coma-like state, suspicions of the supernatural grow to an all-time high. To avoid conviction of witchcraft themselves, the girls are forced to accuse an innocent Barbadian slave who accompanied them in the forest of taking part in satanic rituals. With their newfound power, Abigail Williams along with the other girls start to falsely condemn other villagers of fraternizing with the Devil for personal gain. Along the accused is John Proctor's wife, who Abigail wants out of the picture in order to reignite a previous romantic affair with John Proctor himself. ...read more.

Plot/Continuity - 8.7 Originally written by Arthur Miller, the plot is deep and in-depth, making the audience pay close attention so that nothing is misheard or omitted. The storyline creates much suspense and gives a lot of thrill; however at some points scenes were deemed as circular and repetitive. This was noted for many of the scenes involving the court. Scenes containing the girls pretending to see the Devil could have been portrayed better, because at times their whimsical cries seemed more comical than suspenseful. Character Development/Acting - 8.7 The chemistry between Abigail and Proctor was definitely one of the highlights of the movie. It was indeed suspenseful and struck thrill into the audience whenever these two characters interacted with one another. Also, the two characters shared a unique aura around their interactions, aside from the typical protagonist/antagonist struggle we regularly encounter. Reverend Hale's portrayal of empathy for Proctor was also well done; the audience was able to follow his train of thoughts and emotions throughout the film which he did an excellent job in displaying. One flaw I would have to pick out from the film would be the accusing group of girls, because the false curses and interactions with the supernatural could have been portrayed better and with less absurdity. ...read more.

Another mistake was when John Proctor and his wife are having a private conversation near the end of the film, his teeth look normal. However in the very next shot, his teeth look rotted and decayed. This was followed by the scene where Proctor is hanged, where his teeth are perfectly white once again. There is also a scene where Elizabeth Proctor is being brought to the court, where the left rear wheel of the cart is not spinning. These flaws, if noticed, bring down the movie's value by the lack of professionalism. Cinematography/Special Effects - 9.5 The pictures and scenes shot were absolutely magnificent, and which I thought was what made the movie stand out. By capturing the shots with the livestock and the town, I thought that the true essence of 17th century America was achieved. However, not many special effects were used in the film, which was good in the sense that it preserved the natural setting of Salem, but if added where appropriate would definitely improve the film. Hytner makes up for this with the excellent shots of the town, which I found were quite realistic and believable. ?? ?? ?? ?? [Film Critique: The Crucible] [2012 Written by: Timothy Doan ...read more.