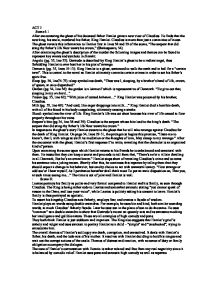 Hamlet ACT I Scene I:1

ACT I Scene I:1 After encountering the ghost of his deceased father Hamlet gains a new view of Claudius. He finds that the new king, his uncle, murdered his father, King Hamlet. Claudius is more than just a committee of incest. The ghost reveals this information to Hamlet first in lines 38 and 39 of the scene, "The serpent that did sting thy father's life Now wears his crown," (Shakespeare, 34). After examining the ghost's description of the murder the following images and themes can be found to represent key events and symbols in Hamlet: Angelic (pg. 35, line 55): Gertrude is described by King Hamlet's ghost to be a radiant angel, thus forbidding Hamlet to ever hurt her in his plot of revenge. Demonic (pg. 35, lines 10-13): King Hamlet is a ghost, sentenced to walk the earth and in hell for a "certain term". This is central to the novel as Hamlet ultimately commits certain crimes in order to set his father's spirit free. Sleep (pg. 36, line74-75): sleep symbolizes death, "Thus was I, sleeping, by a brother's hand of life, crown, of queen, at once dispatched." Garden (pg. 34, line 36): the garden is a leitmotif which is representative of Denmark. "Tis give out that, sleeping in my orchard..." Poison (pg. 35, line 62): "With juice of cursed hebenon..." King Hamlet was poisoned by his brother, Claudius. Milk (pg. 35, line 69): "And curd, like eager droppings into milk..." King Hamlet died a horrible death, with all of the blood in his body coagulating, ultimately causing a stroke. Blood: symbolizes the river of life. King Hamlet's life was cut short because his river of life ceased to flow properly throughout his veins. Serpent's bite (pg.34, line 38 and 39): Claudius is the serpent whose bite lead to the king's death. "The serpent that did sting thy father's life Now wears his crown." ...read more.

In comparison to the first soliloquy, the second soliloquy references Hamlet's inaction while the first references women's frailty in terms of Gertrude. ACT III Scene I Claudius, the queen, Polonius, Ophelia, Rosencrantz, and Guildenstern are plotting against Hamlet. The plan is to spy on hamlet to see what is wrong with him and if the problem is his love for Ophelia. (Pg. 53) He is having an internal conflict about whether or not to commit suicide. He figures it is the only way to escape his reality. "To be or not to be" can mean either a debate about whether or not to commit suicide or a debate on whether or not to kill Claudius. He is having terrible nightmares and just wants all of this to ne other. Shuffled off=Claudius messes things up. Theme: death, unsure. Mood of soliloquy=mad, upset, betrayal. He is mad at Ophelia for betraying him and attempts to push her away so she does not have to deal with his madness. Beauty hides dishonest=paradox. Symbolism=nunnery=harlot, common. Ophelia still loves him and thinks he is going crazy. (pg. 56) Claudius and Polonius believe that Hamlet is going crazy and must be sent away. He cannot kill him in Denmark because 1) he is King Hamlet's son 2) he is married to his mother and 3) the public likes him. The king knows that Hamlet is not acting like that because he is in love with Ophelia. Scene II To be able to prove that Claudius did kill Hamlet's father, he lectures to the players that the play must be perfect. The play, "the mouse trap," is a paradigm of life. He is catching the conscious of the king (pg. 57). (pg. 59) Hamlet reveals to Horatio what he learned from the ghost, but does not reveal that Claudius actually murdered his father. He asks Horatio to watch what type of reaction Claudius has to the play. ...read more.

Laetres lies because the whole time he is talking to Hamlet he secretly has poisoned his sword and is planning on unfairly murdering him. Because he will be dying along with Laertes. Since poison was the original instrument of murder, it is ironic that Claudius dies in a similar way that he killed King Claudius. This exemplifies a theme of what goes around comes around. Laertes is confessing that to Gertrude that Claudius killed king Hamlet and that Claudius put poison on the sword and in the wine. He is expressing hope that he will be forgiven for confessing and repenting his sins. He wishes he had time to take the crown from Claudius and be alive to rule his kingdom. He echoes King Hamlet's spirit who wishes he was still alive to rule Denmark. Hamlet asks Horatio to do this because Hamlet is dying and needs Horatio to tell Fortinbras and the world what has occurred. In this speech, Horatio speaks highly of Hamlet's character, honor as well as his courage. Horatio refers to Hamlet highly after his death, demanding that he be carried off to a proper burial. The news that comes from England is that Rosencrantz and Guildenstern are dead. Osric declares that Fortinbras has come in conquest from Poland and now fires a volley to the English ambassadors. The arrival of Fortinbras signifies the end of a corrupt era in Denmark. He orders that the dead bodies be put on a platform and that he speaks about the story over time in Denmark. The Denmark under Claudius was completely corrupted throughout where as the Denmark that could have been under Lord Hamlet would have been a stable society that may not have been infiltrated by Fortinbras. The Denmark headed by Fortinbras will most likely by very different than the others. He understands that Hamlet was proven to be the most loyal. Fortinbras says " Such a sight as this Becomes the field, but here shows much amiss." He does not understand why he has died and killed if he is most loyal. ...read more.