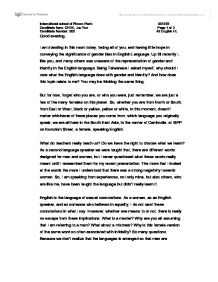 I am standing in this room today, facing all of you, and having little hope in conveying the significance of gender bias in English Language. Up till recently I, like you, and many others was unaware of the representation of gender and identity in the Eng

Good evening, I am standing in this room today, facing all of you, and having little hope in conveying the significance of gender bias in English Language. Up till recently I, like you, and many others was unaware of the representation of gender and identity in the English language. Being Taiwanese I asked myself, why should I care what the English language does with gender and identity? And how does this topic relate to me? You may be thinking the same thing. But for now, forget who you are, or who you were, just remember, we are just a few of the many females on this planet. So, whether you are from North or South, from East or West, black or yellow, yellow or white, in this moment, doesn't matter whichever of these places you come from, which language you originally speak, we are all here in the South East Asia, in the center of Cambodia, at ISPP on Norodom Street, a female, speaking English. ...read more.

Why are you all assuming that I am referring to a man? What about a mistress? Why is this female version of the same word so often associated with infidelity? So many questions. Because we don't realize that the languages is arranged so that men are identified with glorified and exalted positions, but the language is similarly arranged to associate women with service-oriented positions ,where we are being dominated and instructed by men. Sexy or successful,[ pause, put on sexy voice] ,why not both[wink]? As women, we first and foremost are valued for our attractiveness and sexiness of our bodies, whereas men are valued for their physical strength and accomplishments. This inequality can make obtaining jobs and earning respect difficult for women. This can be seen through an example of ISPP community, why did we never have a female principle? Is this because we, as students, we would not respect her for her authority? ...read more.

So is the solution gender natural language? As a member of the world, a member of the ISPP community, and most importantly a member of the female gender, we live in an unfair World, a very prejudiced world. Almost everything we say, we do, we see, we hear can be put into one of the three categories, sexism, racism or prejudice against people. How sad is that! [Really bitchy white girl] Today, I am standing here with courage, talking to you all, stating our inequality in society, and hoping to bring to the attention of those of you who have not realized as women, we are powerless in relationships, employment, economics and society in general. It might take a month, a year, a decade or even a century to get everyone to understand, and until we have learned to challenge society and gain equality for our own benefit, these would never happen and English language will remain bias. ?? ?? ?? ?? International school of Phnom Penh 001222 Candidate Nam: CHEN, Jou Yun Page 1 of 3 Candidate Number: 002 A2 English HL ...read more.