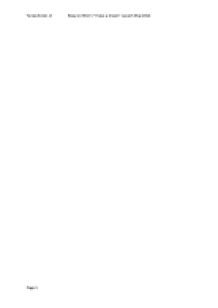 'I have a Dream' - analysis of Martin Luther King's speech.

﻿Tereza Sokol, 2i Essay on MLK?s ?I have a dream? speech May 2012 ________________ Essay on Martin Luther King, Jr.?s speech ?I had a dream? (Answering question 1) Throughout Martin Luther King?s life he has written a series of speeches in connection to the Civil Rights Movement for the African-American people. Some more famous than others, but there is no doubt that most famous speech of them all, is the speech King prepared for the demonstration, known as the ?March on Washington?, at the Lincoln Memorial on the 28th of august 1963 ?I have a dream?. Besides the people, who participated in the demonstration and who he spoke directly to, the speech was televised on national television, so a broad audience indeed. King is famous for mastering the art of pure persuasion with the use of many rhetorical devices, imagery and allusions. Just a few lines[1] into the speech, is the first use of imagery. He describes the signing of the Emancipation Proclamation by Abraham Lincoln as the following: ?? a great beacon light of hope to millions of Negro slaves, who had been seared in the flames of withering injustice? (Line 32-33, page 223) ...read more.

Another example of imagery in the speech is when he speaks of America?s debt to the African-American population: ?We?ve come to our nation?s capital to cash a check ? America has given the Negro people a bad check, a check which has come back marked ?insufficient funds.?? (Line 8 & Line 17-18, page 224) Here, King compares the situation with what was, back then, an unpleasant, yet quite common scenario: a useless check. This is a quite accurate comparison, as the bad check is a metaphor for the promise of better times that was given from the white population of America to the African-Americans back when the slavery ceased, but when the African-American attempted to cash in the check, it seemed that there was no justice left for them. This, once again, clarifies the situation, since it is explained in simple terms that everyone can relate to. King continues using imagery throughout the entire speech, often paired in strong contrasts to each other. ...read more.

This is a very strong device. It gives a lot of power to the passage and beside the obvious pathos appeal; it adds ethos appeal as this device along with others, like alliterations, assonances and in general the group of rhetorical devices that manipulates directly with the sound of the words rather than the meaning, makes his language very smooth and convincing. All in all, it seems that one of Martin Luther King Jr.?s biggest advantages was his fluent language which derived from his natural use of imagery, rhetorical devices and appeal forms and in general his perfect mastering of the art of manipulating with words. His use of his advanced language brought out and explained his message so it could be understand by anyone. These skills made him very convincing and there is no doubt that besides his strong personality and faith, this was one of his strongest forces and without them, he might not had become one of the greatest freedom fighters in modern times. Page ________________ [1] Using the version of the ?I have a dream? speech from Martin Luther King, Jr.?s Autobiography, first published in 1999 ...read more.