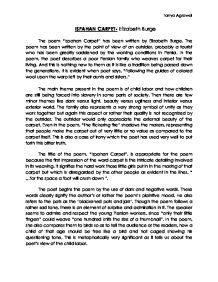 ISPAHAN CARPET- Elizabeth Burge The poem "Ispahan Carpet" has been written by Elizabeth Burge. The poem has been written by the point of view of an outsider, probably a tourist who has been greatly saddened by the working conditions in Persia. In the poem, the poet describes a poor Persian family who weaves carpet for their living. And this is nothing new to them as it is like a tradition being passed down the generations. It is evident when poet says, "Following the guides of colored wool upon the warp left by their aunts and sisters." The main theme present in the poem is of child labor and how children are still being forced into slavery in some parts of society. Then there are few minor themes like dark versus light, beauty versus ugliness and interior versus exterior world. The family also represents a very strong symbol of unity as they work together but again this aspect or rather their quality is not recognized by the outsider. The outsider would only appreciate the external beauty of the carpet. ...read more.

In the poem, she also compares them to birds so as to tell the audience or the readers, how a child of that age should be free like a bird and not caged showing his questioning tone. This is metaphorically very significant as it tells us about the poet's view of the child labor. She uses alliterations like, "whose whole", "rope-rising", "solemn sallow" and "world's weaving". He also uses juxtapositions in the last line as "speaking darkness". The poet's use of alliterations and juxtapositions creates a solemn and grave environment. The poet uses the technique of repetition of dark words such as "silent, swallow", "unsupported", "greemtick shoulders", "rough timber gallows" etc. to create a dark and blackened atmosphere. She also uses juxtaposition to highlight the misery of those young girls. The poem is written in present tense which shows that the activity taking place is so striking that it does not take time for the feeling of pity to be aroused for those little girls. It is evident in the reaction of the poet in the poem, "O" and "Can...." ...read more.

it shadows their hard work put in weaving the carpets as evident in the line, "A flickering fire...shadowing the makers of the web." She also uses imagery to highlight the death like condition the girls have to suffer in the words like, "rope rising", "unsupported" bones, and "bent...old women". This signifies that the worth of their job is void as at the end carpets are crushes under feet of other people who do not recognize the labor put in. At the end, it can be seen that though on one side the world is advancing with various discoveries and inventions but on the other side its future, the youngsters, is in dangerous hands of child labor. She has throughout focused on the theme of child labor being practiced in various parts of the world and the fact that it is going unnoticed. She deeply involves the readers in feeling the agony of those workers who are weaving carpets for other people when their own life is so enweaved with no knowledge of the reality that exists as the poet says, "O eyes whose whole horizon is the carpet". ?? ?? ?? ?? Tanya Agrawal ...read more.