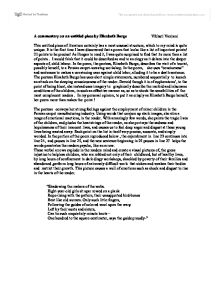 A commentary on an untitled piece by Elizabeth Burge Vibhuti Vazirani This untitled piece of literature certainly has a most unusual structure, which to my mind is quite unique. It is the first time I have discovered that a poem that looks like a list of important points! 21 points to be precise! As I began to read it, I was quite surprised to find that its more than a list of points . I would think that it could be described as and to an elegy as it delves into the deeper aspects of, child labour. In the poem, the poetess, Elizabeth Burge, describes the visit of a tourist, possibly herself, to a Persian carpet-weaving workshop. In the poem, she uses "conciseness" and sentences to makes a convincing case against child labor, alluding it to be a death sentence. The poetess Elizabeth Burge has uses short simple statements, numbered sequentially to launch an attack on the sleeping consciousness of the reader. Devoid though it is of euphemisms', to the point of being blunt, she instead uses imagery to graphically describe the morbid and inhumane conditions of the children, in such an effective manner as, so as to shock the sensibilities of the most complacent readers . In my personal opinion, to put it as crisply as Elizabeth Burge herself, her poem more than makes the point ! The poetess conveys her strong feelings against the employment of minor children in the Persian carpet manufacturing industry. ...read more.

This sentence also exposes the callousness of people everywhere, who revel the exquisiteness of such carpets created by the profiteers, people by their exploitation of little children. The poetess helps us to see this paradox of human nature, as depicted by the behavior of the guide in the poem. I personally felt amazement and horror, at the degree of numbness and blindness that self-interest can possibly generate turning us into cruel inhumane beings. Even as the guide is knowledgeable and boast of the exquisiteness and fine work done by the children, he completely fails to acknowledge the cruelty and hardship they endure in the process. His conscience is asleep, while his intellect alone seeps awake. Here the poetess I feel is alerting us to the dangers and threats of those with alert minds but sleeping conscience. With the denouement "One hundred hours for the space a foot will crush down", she skillfully illustrates the shocking reality and the purposelessness of the activity of Persian carpet weaving , which is possible only at the cost of robbing the little girls of their childhood and health. These lines shock and awaken the reader to the gross injustice done to the little children by profiteers like the weaves who make, the guides who promote and the wealthy people, who buy the carpets crafted by little girls - by effectively forcing them to grow bent and age prematurely from the rigors of their hard labor. Elizabeth Burge, masterfully conveys the pathos of the huge efforts of the children, in vain, as no matter how much they ...read more.

With just four simple sentences, "One hundred to the square centimeter, says the guide proudly - For the most desired Tabriz or Kermanshah. One hundred knots in the space of my thumb-nail, One hundred heart-beats of a young child's growing, One hundred hours for the space a foot will crush down." The poetess jolts ones sleeping consciousness to wakefulness by highlighting stark immorality of creating of products of the greatest luxury, such as the finest carpets of such excellence for feet of the wealthy. Requiring such difficult workmanship, through the exploitation of poor helpless little girls, and at the cost of their health and lives scores of child laborers subject to utter poverty and living in abject dark unhealthy hearths. By people to the little workers who are deprived of and in itself, enlightens the reader of the poem, as exhaustively as a picture would. The poetess Elizabeth Burge describes the conditions of children in a Persian carpet weaving workshop. She very rationally unfolds the scene in the workshop, uses a list of points to communicate her message., With this unusual even, simple structure, she uses a very rational approach and simple words to achieve very effectively what every poet would want to achieve - the unlocking of the heart and sprit of the reader and the transforming his mind set. The simplicity of the structure and direct observations and facts presented like bullets, using simple statements is a style that delivers the poets message with power and punch, leaving the reader shocked , enlighten and changed forever. ...read more.